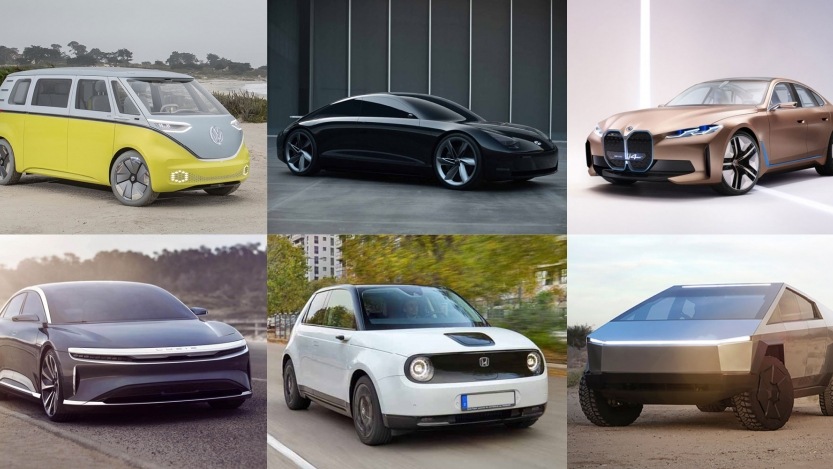 Fifty years ago, some people predicted we’d be driving anti-gravity cars. Twenty years ago, others forecast we’d be behind the wheel of self-driving cars. Some even thought we’d own cars that could go months without refuelling.

Only 9% of people surveyed back in 1989 predicted that the cars of the future would be electric. And yet that’s the overwhelming trend shaking up the motor industry today.

Predictions of future cars… from the past

Even before the first car was invented, some people were trying to imagine what type of vehicle we’d be using in the future. As early as 1882, artist Albert Robida imagined a future where we’d visit the opera in our own flying machine.

But flying was only one of the themes envisaged for the cars of the future. Back in 1918, an article in the Washington Times announced that the cars of tomorrow “Will be constructed like a moving drawing room”. An image from the time shows families sitting and reading inside a car with expansive windows. Nobody wears a seatbelt, and nobody’s actually driving. 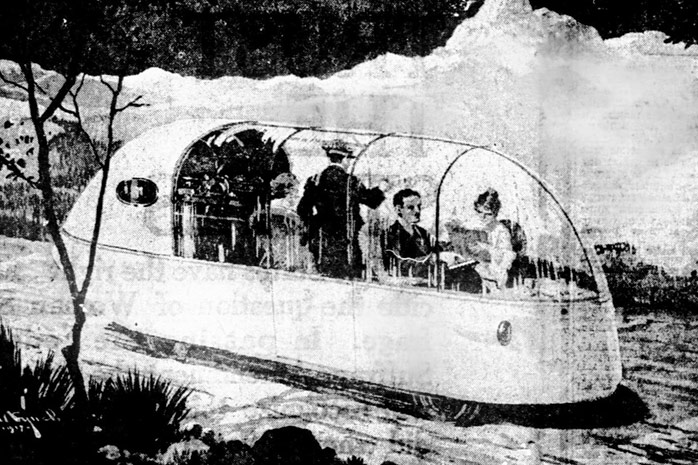 In fact, the lack of a driver is a recurring prediction about the future of cars. While engineers and designers spent decades making cars more enjoyable for us to drive, popular films and fiction dreamed time and time again of nobody having to! There was Herbie, the friendly Volkswagen Beetle, from the Love Bug; Christine, the murderous Plymouth Fury in the cult horror movie of the same name; and Johnny Cab, the driver-less taxi that Arnold Schwarzenegger’s character hails in the sci-fi film, Total Recall. 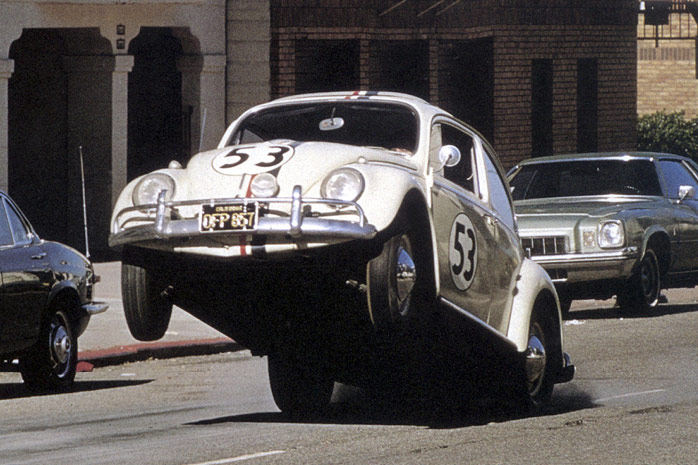 Did KITT predict the future of cars? 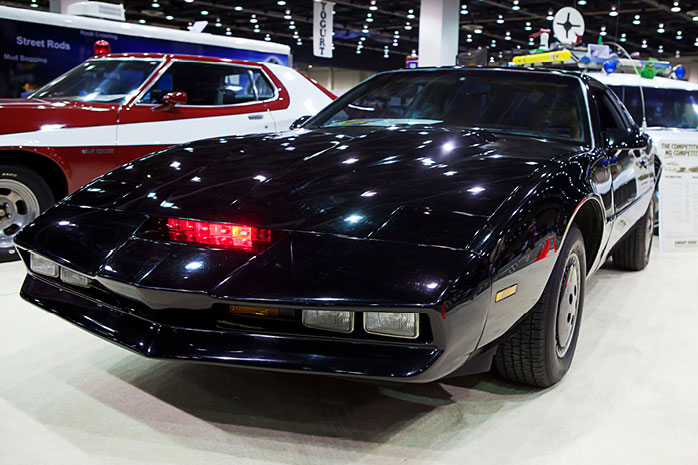 The real car of the future: it’s electric

Flying and talking cars aside, there’s now little doubt that the car of the future will be electric. Sales of electric cars have tripled in a year: in the first two months of 2020, 6,500 were sold; compared to 2,000 electric cars in the same period last year. And from 2035, you won’t even be able to buy a new petrol or diesel car.

Google, Waymo and others might be researching self-driving cars, but Tesla is building them… almost.

Tesla says that its cars already come with the hardware they’ll need for ‘full self-driving capabilities’ in the future. And already, Tesla drivers can get a taste of what’s in store with Autopilot: probably the most advanced driving assistance feature on cars today. It steers, brakes and accelerates your Tesla automatically within its lane on the motorway. But unlike those self-driving cars of the future, you have to keep your hands on the wheel… for now, at least.

Many electric cars feature advanced safety technology, designed to reduce the likelihood of a crash. Autonomous emergency braking (AEB) systems, for example, can slow or stop the car, to reduce the risk and severity of accidents in cities or motorways. Lane support systems can warn or even help steer the car, to avoid distracted drivers wandering between lanes. While attention assist features can spot drowsy driving and give a warning. Some cars even stop if the driver doesn’t respond.

Voice control has gone from the realm of sci-fi to a feature of our everyday lives. ‘Hey, Google’, ‘Alexa’ and ‘Siri’ are now part of our modern lexicon. Using Apple Carplay and Android Auto, we can use our voice to navigate, select music and check the weather while driving. Some electric cars come with their own voice control system. So you can change the car’s settings with your voice, even down to the colour of the interior lights. In Mercedes’ EQC 400, you can use hand gestures to control your ‘infotainment’ instead. So your eyes remain firmly fixed on the road ahead.

Most of us take sat-nav for granted. But future electric cars are pushing the boundaries of conventional navigation systems. Already, electric cars understand how their available range might affect your destination. And many will plan a charging stop, if you need it, on your route.

With better maps and traffic data, cars are becoming aware of the road ahead too. The Porsche Taycan knows about corners up to two miles away and can help you extend your battery range by coasting down to a suitable speed. Some electric cars project directions onto the windscreen. Mercedes has even created an augmented reality (AR) navigation. So it points which way you need to go on the screen when you approach a junction.

Imagine never having to parallel park your car again. Well, last September, Tesla rolled out ‘Smart Summon’ in its latest software update. With this auto-parking feature, you don’t even need to be behind the wheel of your car. A Tesla will drive itself out of a parking space and come find you. As the company made clear in its announcement: “It’s the perfect feature to use if you have an overflowing shopping cart, are dealing with a fussy child, or simply don’t want to walk to your car through the rain.” Admittedly, the technology isn’t perfect yet; but it’s certainly a taste of things to come.

You can already buy about 40 different models of the electric car in the UK, with another 30 coming soon, according to EV Database. But take a look at some of the concept cars being showcased by manufacturers, and you get a sneaky peek of some of the features we might see on electric cars in the future. 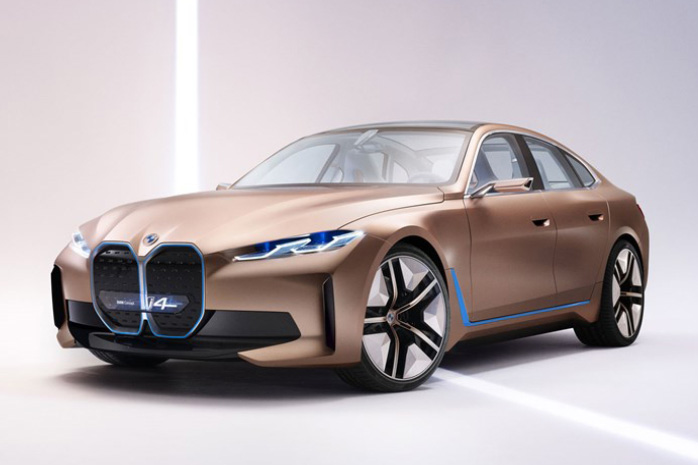 Concept cars can be outrageous, or they can hint at a soon-to-be-released new model. BMW’s Concept i4 firmly falls into the latter category. It gives a pretty strong idea of what the real i4 will be like when it launches in 2021. Similar in proportion to the current 4-series coupé, it comes with an expansive, airy cabin and some tantalising future features: 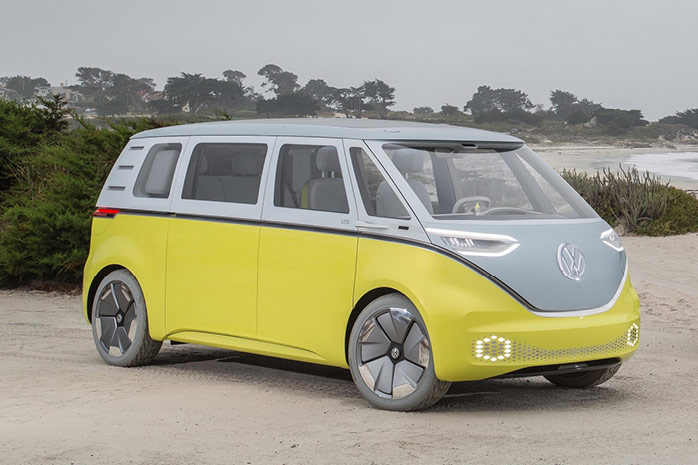 Volkswagen is hoping that fans of its iconic campervan will flock to the ID. BUZZ, which brings it back to life in electric form: 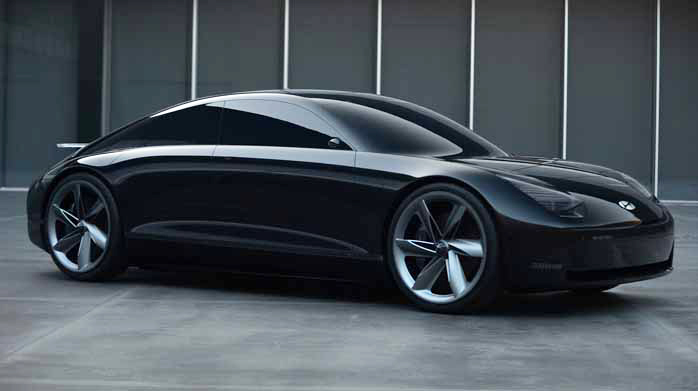 Hyundai is establishing itself as a major electric car brand, thanks to models like the Ioniq and Kona. But the Prophecy, its high-end concept car unveiled in March, takes the manufacturer into a whole new realm: 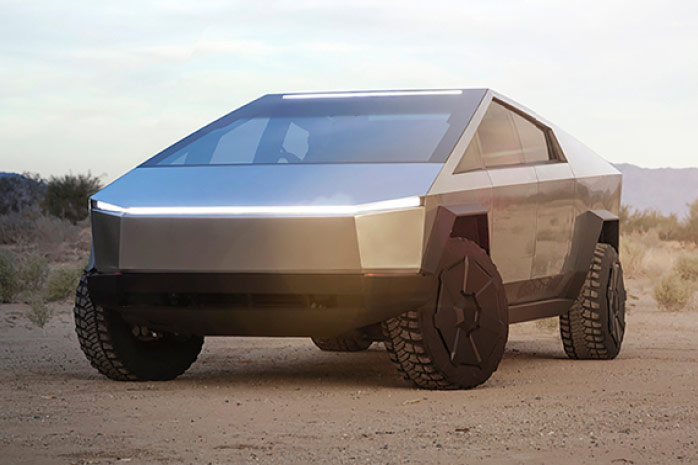 Sometimes concept cars remain just that: a concept on the drawing board. But occasionally even the most outlandish concept cars make it into production. Meet the Tesla Cybertruck: fast and with a big range, the idea is to tempt Americans away from their gas-guzzling trucks. Here’s how: 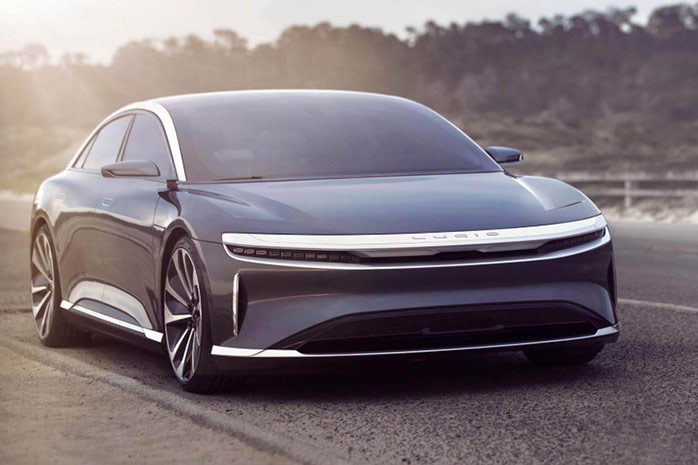 Concept cars give small newcomers a chance to make their mark. And Lucid is one manufacturer trying to do just that. The company began life developing electric battery technology for other carmakers. But with its Air concept, it’s now moved into the production of electric cars too. Here’s what makes the Air stand out:

We can’t predict the future. But there are some near-certainties about how the cars of the future will look and behave. And as electric technology improves, even more, the way we understand transport might change altogether.

Batteries keep getting better, so future electric cars will have greater range and longer durability. Today’s lithium-ion technology, for example, is a giant leap ahead from the batteries that powered milk floats, and even those used in early hybrid cars.

Newer technologies and better management promise to improve things still further. Say hello to wireless charging. And goodbye to waiting around, with rapid charging enabling you to recharge and go in 30 seconds!

As electric cars hit the mainstream, manufacturers are also thinking seriously about the environmental impact of worn-out batteries. Volkswagen recently announced a major project to recycle batteries from its I.D. series of cars. While some electric car batteries will even get a ‘second life’ providing power storage in our homes. 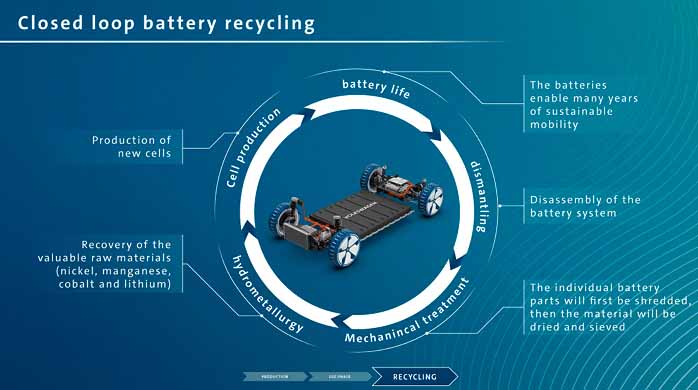 Hydrogen stores more energy than a battery for the same amount of space. It’s quicker to refuel a hydrogen vehicle, and their range tends to be slightly greater than today’s battery equivalents. Best of all, using hydrogen as a fuel produces only heat and water.

But at present, hydrogen vehicles are so rare they don’t even figure in the UK’s statistics. And despite promising new models from Toyota and Hyundai, hydrogen filling stations lag well behind charging points for electric cars. Hydrogen fuel cells are comparatively complex and expensive, too. This could prevent hydrogen-powered cars from going mainstream… But as past predictions show, who knows what the future holds?

Self-driving cars are coming… But maybe not as soon as predicted in the past. Today’s cars already help us avoid accidents or manage our speed on a motorway, but it’s a huge leap to go from this to self-driving technology. Aside from the huge technical challenges, there are moral questions to answer too. If a self-driving car causes an accident, for example, who’s to blame? Driving laws will also need to change to reflect this new reality. So it could be these practical challenges that delay the roll-out, rather than the tech needed to turn autonomous driving into a reality.

Doc Brown’s DeLorean from the classic film Back to the Future famously didn’t need roads. But are flying cars ever likely to become reality? 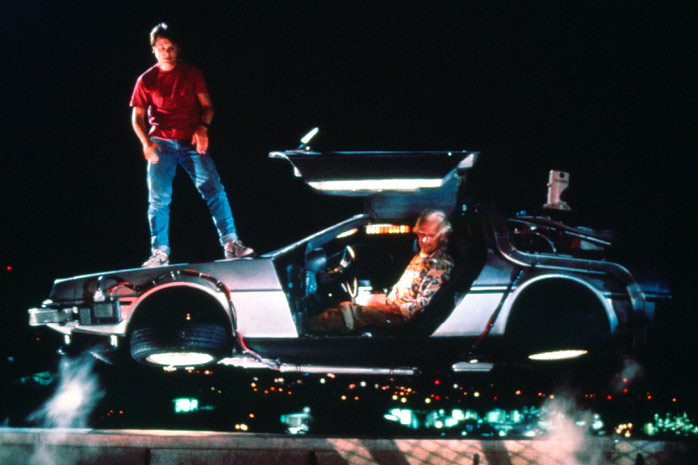 In fact, several companies are already vying to be the first to take a car into the skies. And you can already pre-order a flying car from Dutch manufacturer PAL-V, with the first deliveries scheduled for 2021.

Cars and PAVs may grab the headlines, but batteries are transforming other types of transport too. E-bikes are soaring, with up to 130 million sales expected between 2020 and 2023. Electric scooters are also on the rise, partly thanks to sharing services like Lime and Razor. So one trend that definitely doesn’t look to be going anywhere is electric technology. The past, present and future are well and truly electric.

And finally… Will we even own a car?

In the future, we might not just be more relaxed about what a ‘car’ is, but also who owns it. Already, 91% of UK private cars are bought on finance. And with the rise of car clubs and app-based taxi services, we may move to a future where few people even keep a car on their driveway.

Many analysts predict the rise of ‘mobility as a service’ (MaaS), where subscriptions or pay-as-you-go models give users access to cars only when they need them. Car clubs already offer a taste of this. But it’s likely that driverless cars will add a new level of convenience that makes these really take off.

In fact, Deloitte predicts that 80% of travel in urban areas by 2040 could be in shared driverless vehicles. So while electric cars might represent the future of driving. It’s likely we’ll all end up as passengers, rather than being behind the wheel of the car.

Want to drive off in your own electric car today? Take a look at the range of leasing deals we have on electric cars.