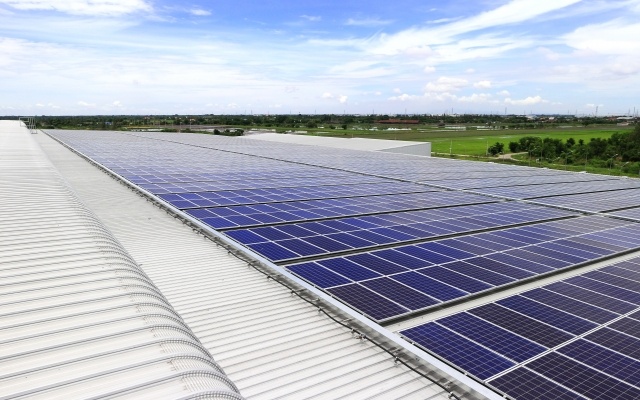 Through these three contracts, 60 MW of renewable power will be provided to Tesco, from 17 roof-mounted solar installations and from two Scottish onshore wind farms.

These new solar and wind projects contribute to the EDF Group’s Cap 2030 strategy, which aims to double its renewable capacity globally, between 2015 and 2030, increasing to 50 GW net.

EDF Renewables - which benefits from recognised global expertise in Commercial & Industrial distributed solar solutions - is now moving into this field in the UK.

EDF Renewables UK will install fifteen thousand roof-mounted solar PV panels on seventeen Tesco stores across England[i]. This is a total of 5 MWp of installed capacity.

Construction is already underway and it will be completed by the end of next year (2020).

CEO of EDF Renewables UK, Matthieu Hue said, “We are very pleased to be working with Tesco which is already one of EDF’s biggest customers in the UK. These projects show the ability of EDF to provide diverse solutions for customers in terms of low cost renewable electricity.

“These exciting projects also demonstrate our ability to develop subsidy free solar and wind in the UK as well as underpinning the important part these technologies play in de-carbonising the UK electricity system to reach the country’s net zero targets by 2050.”

The company’s shareholder in the UK, EDF Energy, is helping customers find the best solutions to achieve their low-carbon ambitions by facilitating partnerships with renewable developers. As electricity supplier to Tesco, EDF Energy has enabled the supermarket chain to use power from renewable sources by providing a framework to work with EDF Renewables and other developers.

For several years, EDF Renewables has been forging ahead with a number of solutions across the world, helping commercial & industrial customers find the best way to achieve their low carbon ambitions through generating renewable energy. Among its international customers: Microsoft, Procter & Gamble, Kimberly-Clark, Yahoo, Nivea, Danone, Coca Cola, Nestlé and Wahaha.

Jason Tarry, Tesco UK and ROI CEO, said: “Our supply chain and long-term business sustainability depend on the health of the natural environment. Our customers and colleagues expect Tesco to play its part in caring for the planet.  This project represents a major milestone in our journey to using 100 per cent renewable electricity by 2030.”

EDF Renewables is part of one of the world’s largest electricity companies and our investment and innovation in the UK and Ireland is bringing down costs for consumers and bringing significant benefits for communities. With our operating portfolio of 36 wind farms and battery storage unit (almost 1GW) we are providing some of the much needed new affordable, low carbon electricity to the UK.

Work is well underway on the 450 MW Neart Na Gaoithe offshore wind farm project which is in the Firth of Forth and we’ve extended our Edinburgh office to accommodate around 60 new team members. We have recently acquired Pivot Power, a start-up which specialises in battery storage and infrastructure for electric vehicle charging which will help us meet our ambitions in storage and electric mobility.

We have more than 2 GW of renewables projects in construction, planning and development and half of those are consented. We also have offices in Dublin, Rainton Bridge near Durham and in London.

EDF Renewables is a joint venture between EDF Renouvelables and EDF Energy.

Find our more at www.edf-re.uk.

Find out more about EDF Renewables