The following information was sent to the Fairlie Community Council and the wider Hunterston SSG group in response to questions lodged by the community council ahead of the Site Stakeholder Group meeting on 7 March 2019. The responses reflect the findings of the work we have been doing with leading consultancies and expert academics at universities across the including Strathclyde, Glasgow, Bristol, Manchester, Oxford, Sussex, Nottingham and Durham as well as with leading UK companies such as AMEC Foster Wheeler, W S Atkins and Fraser-Nash. And we have spent more than £125m in the last six years and invested more than 1000 person years into research.

(1) When was the first Keyway Root Crack detected /observed at (a) Hunterston B and (b) Hinkley Point B?

(2) How many and on which dates were subsequent checks done (at Hunterston B) to investigate extent of Keyway Root Cracking?

What we are keen to emphasise is the number of cracks is one measure covered within our safety cases.  The most important thing is whether we have seen any distortion in the control rod channels during normal operation or during a severe earthquake.  To date we have not seen or demonstrated a distortion though any of our seismic testing that would stop the reactor from shutting down safely as designed.

(4) Based on these findings can the rate of increase of Keyway Root Cracking be accurately established?

The cracking rate established by the extensive inspection on Reactor 3 was used to predict the number of cracks that would be found in R4 when it was shut-down in October 2018. The prediction proved to be accurate.

(5) Do inspection results confirm the rate of Keyway Root Cracking is speeding up or remaining the same ?

The rate of cracking is broadly following the predicted growth rate. The extensive inspections done on R3 have provided information which has allowed the predictions to be further refined which will assist with accuracy as we move into the future.

(6) Is it too early to compare Reactor 3 and R4`s rate of KR Cracking to establish whether both are behaving in the same way and are likely to have the same rate of progression.

As stated in the response to question 4, the information obtained from inspection of R3 was successfully used to refine the prediction of cracking rate for R4. This result indicates that the two reactors are progressing in a similar manner.

(7) At this stage, (a) what conclusions if any are likely to made about KRC progression for the other EDF stations, particularly Hinkley B which is closest in age to Hunterston B? (b) How does Hinkley`s KRC compare to Hunterston`s and if it is very different. (c) What viable reasons can be given for any difference (if there is one) they are of similar age.

Although all the reactors in the AGR fleet have graphite cores there are slight differences in the design in terms of how the graphite bricks are keyed together. In addition the Stations have been operated in different ways in terms of power history and detailed coolant chemistry. These factors mean that the information obtained at Hunterston provides a useful baseline for the remainder of the AGR fleet.  That is why we continue to inspect, model and analyse the graphite at each station to understand the exact material properties and make a fully accurate prediction of future behaviour.

These detailed material property differences are the main reason why onset of KWRC has been later at HPB than at HNB. It is now expected that HPB will progress in a broadly similar manner to HNB but there are likely to be slightly different rates of cracking which will be monitored by routine inspection.  The Hinkley B statutory outage starts on the 8th March 2019.

(8) At ONR`s (Nov 2018) request, EDF `s Seismic Building Modelling was to be improved. Has this been done and how has it been done?

Yes. The new seismic model has been developed by EDF Energy which gives a more realistic response to a seismic event by providing more accurate data on how the various parts of the structure link together (eg how the pressure vessel connects to the bedrock, how the graphite core connects to the pressure vessel etc.) As stated this revised model allows EDF Energy to demonstrate that core is able to maintain large margins of safety in a significant seismic event even with numbers of cracked bricks significantly in excess of current observations.

(9) Can the Scaled Down Model`s substitute material (for graphite) be expected to behave in exactly the same way as the Hunterston graphite?

The quarter scale model is designed to test the ability of our computer codes to model the seismic response of our cores. This is done by demonstrating our computer codes can predict the behaviour of the scale model with high accuracy using material properties consistent with the model. As the differences between the material properties and the core graphite are well understood, we can then adjust the computer code to provide the seismic response for full scale, irradiated graphite with high confidence that the results will conservatively predict the behaviour of the real physical structure.

The material we use is Acetal, the frictional behaviours of both materials are similar.

The associated programme of numerical simulation takes into account all the differences between the experimental rig and the AGR graphite cores, including the substitution of Acetal for graphite.  Great care was taken before doing the tests to demonstrate the similarity of the dynamic characteristics of the test rig to those of the AGR graphite cores, and the measured responses confirmed these expectations.

(10) We appreciate that you have said there have been no MCB`s found during R4`s inspection. Is this true also for R3?

(11) Does MCBs (multiply cracked bricks) referred to in your latest Report for March SSG refer to graphite bricks each with multiple cracks or to there being many more graphite bricks with a single KRC factored into the modelling?

The term MCB is used to refer to any single brick with more than 2 full height axial cracks.

(12) Is the enhanced modelling being sought to investigate the possibility that the core may have areas that, once there is one KRC, then that same area is likely to develop more KRCs at a faster rate?

During the extensive inspection campaign on R3 in 2018 we targeted fuel channels next to existing KWRC’s and did not establish a definitive link between a KWRC in one channel having any correlation to inspection results in the surrounding channels.

(13) Would this scenario signify a greater risk of misalignment of Fuel Rod Channels and/or Control rod Channels? (We understand that no misalignment has been detected to date) 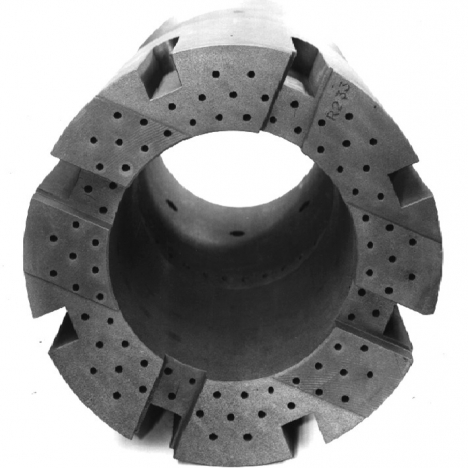