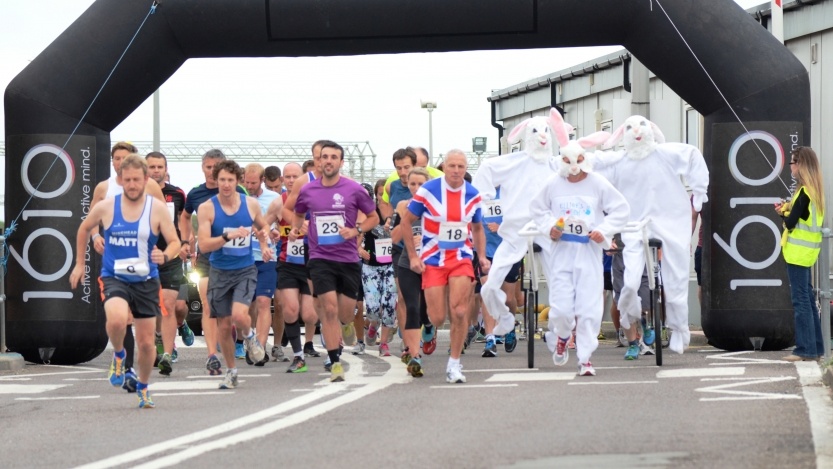 Employees from all three Hinkley Point sites pounded the route from work to Cannington in the nuclear operators’ annual summer fun run to raise cash for charity.

More than 60 competitors from Magnox’s Hinkley Point A and EDF Energy’s B and C sites, along with contract partners donned running shoes to complete the 6.8 miles to the nearby village of Cannington.

Their efforts raised thousands of pounds for good causes and will be shared between local charity Elliot's Touch and Paralympics GB, EDF Energy’s official charity partner.

There were prizes for the first male and female runners and walkers across the finishing line, with all the top honours going to workers from the Hinkley Point C project.

Artur Osicki from C site was the first male runner home in a time of 39 minutes 52 seconds, ahead of Matthew Bowden from A site in 41 minutes and 28 seconds and Simon Patterson of B site in 43 minutes and 23 seconds.

The first female runner to complete the course was Hinkley Point C’s Clare Jackson in a time of 52 minutes and 25 seconds, with B station’s Dee Lewis in one hour and 19 seconds and C site’s Megan Smith in one hour, three minutes and 27 seconds.

In the walking section, Hinkley Point C’s Ken Allan and Will Beach were first, a full minute and a half ahead of second placed Martin Stevens from B station. Natalie Sedgewick and Holly Barton were first in the women’s category, with Olivia Carder second.

Volunteers from all three sites helped to marshal the route, keep times and provide encouragement and water to keep participants going. The runners were cheered over the finishing line by family members and colleagues, before a much deserved drink at the Friendly Spirit pub.

Several runners completed the course in fancy dress, with Peter Evans, station director at Hinkley Point B, lasting the distance despite being dressed as a rabbit and towing two unicycling rabbits behind him. His costume was based on the favourite toy of Elliot Stevens, the son of Hinkley Point B worker, Paul Stevens and his wife Donna, who tragically died of Cardiomyopathy in March 2015 and in whose memory Elliot's Touch has been set up.

Ron Schroder, site director of Hinkley Point A, said: “Year after year the staff at Hinkley push themselves to take part in this event, all in the name of charity. It’s not easy, I know, I’ve done it! We play a big part in the local community and this helps us to give a little bit back.”

Peter Evans, station director, Hinkley Point B, said: “It was a really successful event and I would like to thank the team who organised the fun run. It always proves to be a good opportunity for workers from the different organisations to join together and support good causes along the way."

Nigel Cann, programme and construction delivery director for Hinkley Point C, said: “Well done to everyone who was involved with this year's fun run. I’m looking forward to the run going from strength to strength to raise even more for good causes in future years.”