EDF Group Results 2018 - highlights for EDF in the UK 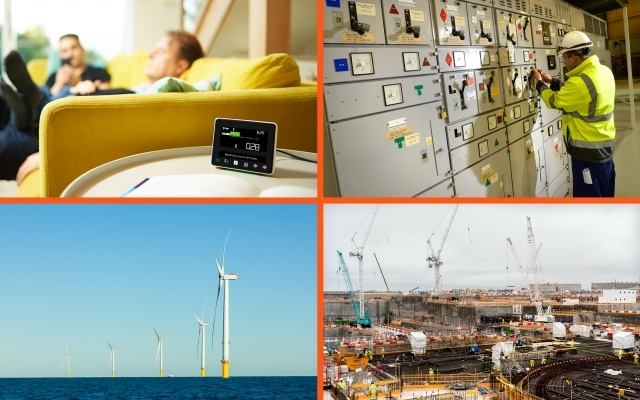 EDF Financial Results 2018 - highlights for EDF in the UK

Please follow this link to the EDF Group media release relating to the Group’s Annual Results for 2018 which have been published this morning. These relate to the performance of the entire EDF Group and include a summary of EDF Energy’s performance in the UK.
EDF Energy will provide a breakdown of how each part of its business has performed when it publishes its annual segmental accounts before the end of April this year.

At the end of 2018, EDF Energy had 3 million residential electricity accounts and 1.9 million gas accounts, a decrease of around 200,000 since the beginning of the year.

EDF Energy remains committed to offering smart meters to all domestic and small business customers who want to benefit from this new technology by 2020. In 2018, EDF Energy installed 515,000 smart meters. More than 1 million smart meters have been installed by us since the programme started.

New products were launched for residential customers to help them take advantage of innovations in energy technology. These include a range of ‘smart home’ products, including domestic battery storage and a home monitoring service, Howz, to support independent living.

EDF Energy announced a partnership with Nuvve Corporation to install up to 1,500 Vehicle to Grid (V2G) chargers in the UK.  V2G chargers allow electricity stored in an electric vehicle to be used in a customer’s home or business or to be sent back to the grid, providing savings on energy costs and generating additional revenues.

The contracting division of our technical engineering company Imtech secured projects worth £450m in the UK and Ireland in 2018 and its maintenance arm retained a number of key contracts.  Imtech’s Low Carbon Solutions continued to add to its portfolio of energy saving projects for NHS Trusts. Imtech also helped to develop Powershift, a platform which allows businesses to become more efficient by switching off or reducing consumption, or by providing electricity to the grid.

All three projects made good progress in 2018.

Construction of the first new nuclear power station in the UK is on track and the project achieved all its key milestones in 2018.

Following consent from the Office for Nuclear Regulation, the first concrete pour for the base of Hinkley Point C’s unit one reactor has been successfully completed. This 4,500 tonne platform provides the stable foundations for the reactor and safety systems. It is made from high quality nuclear concrete, reinforced with steel from South Wales.

More than 3,600 people are now working on site and the project is on schedule to reach ‘J-zero’ in the summer of 2019 when the unit one base will be complete.

380 apprentices are working on the project and the aim is to see 1,000 apprenticeships created over the course of construction. 25,000 employment opportunities will be created during construction.

Hinkley Point C continues to create huge benefits for the South-West. Contracts worth more than £1.5bn have already been awarded in the region.

Replicating the design of Hinkley Point C creates the opportunity for lower construction costs at Sizewell C and makes cheaper financing possible. The project is undertaking its third and final stage of public consultation and has already engaged with more than 5,000 residents and stakeholders.

The benefits to British consumers from replicating Hinkley Point C and using the same trained workforce can be maximised if a final investment decision for Sizewell C is taken at the end of 2021.

The UK HPR1000 design moved into the third stage (out of four) of the UK Generic Design Assessment in November 2018.

EDF Renewables UK continued to develop significant new projects and has more than 1.5GW of renewables capacity in planning or development.

EDF Renewables UK inaugurated the Blyth offshore project which is the first off-shore wind farm to use float and submerge technology.

A new 49MW battery storage project at West Burton B is now operational, providing frequency response services to the National Grid, and further flexibility projects are being explored.

Safety is our number one priority and we are committed to maintaining industry leading safety performance.

During a planned outage of Hunterston B Reactor 3 for graphite inspections in March 2018, new keyway root cracks were discovered in the reactor core. Since then, EDF Energy has implemented the most extensive graphite investigation programme ever undertaken.

In May 2018, EDF Energy decided that Reactor 3 should remain offline for additional inspections and to carry out further work with the nuclear regulator. This work will ensure the longer term safety case reflects the findings of recent inspections and includes the results obtained from other analysis and modelling.

A graphite core inspection on Hunterston B reactor 4 planned for 2019 was brought forward to October 2018.

The units are expected to return to service in the second quarter of 2019.

A statutory outage was started on Dungeness B Reactor 22 in August 2018 with an associated outage on Reactor 21 starting in September. These outages have been extended to complete inspections and repairs to steam pipework and the units are expected to return to service in the second quarter of 2019.

Following a judgment of the European Court of Justice, the UK Government suspended the operation of the Capacity Market in November 2018. As a result, EDF Energy has not received capacity payments for October- December 2018 worth £69m. We are confident the Capacity Market suspension will be lifted and that these payments will be made in due course.

This is effectively the company’s net income from selling energy minus its operating expenses, but it excludes the significant costs involved in repaying loans, paying tax and the declining value of the assets it owns (e.g. buildings, power stations and equipment).

It also does not include the amount a company must invest to maintain existing assets or build new power stations.

This reflects the value used of non-physical assets owned by the company such as copyright, IT systems or patents.

[ii] Drop in earnings also reflects EDF Energy’s sale of 1% of its share in EDF Renewables to EDF EN, decreasing its shareholding to 49%. This deconsolidates EDF Renewables’ results from EDF Energy accounts for 2018, resulting in a drop in reported EBITDA for EDF Energy of £75m.

[iii] Excluded from underlying EBIT is a one-off impairment charge of £144m and other non-recurring expenses of £37m.