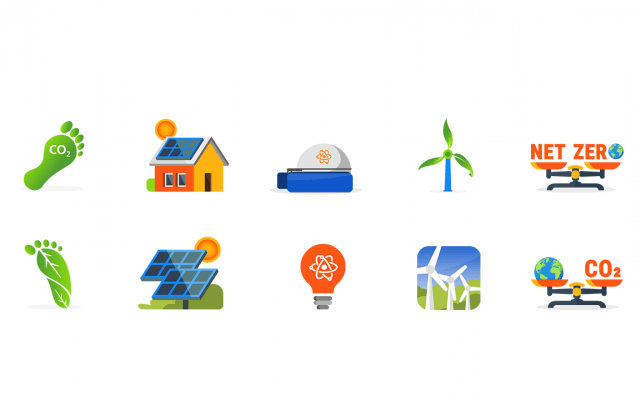 EDF has today launched a new collection of emojis to help more people discuss the key challenges around climate change. The launch comes as new research from the brand reveals that less than a third (27 per cent) of Britons understand what ‘Net Zero’ carbon emissions means, despite it being a key national environmental target.

The research of 5,000 people across the UK showed that nearly half (49 per cent) have no understanding of Net Zero at all, with only 8 per cent feeling they understand it very well. This lack of understanding is discouraging people from talking about climate change altogether[2] – with only a fifth (19.7 per cent) often discussing it with friends, family or colleagues.

So, to help enable more active conversations about carbon emissions and climate change, EDF has launched five new emojis depicting some of the key topics that people might want to reference. The collection includes symbols for ‘Net Zero’, ‘carbon footprint’, ‘wind energy’, ‘nuclear energy’ and ‘solar energy’. These will all be submitted to Unicode for consideration in the official emoji keyboard. Last week’s release of 2021 emojis included no new references to the environment or climate change, so EDF hopes to see these new designs featured in the 2022 update.

Emojis have become the world’s most used language[1] – with 45 per cent of us using them daily, rising to two thirds (65 per cent) of 18-34 year olds. A total of 40 per cent believe emojis help people discuss complex issues more easily – with a third (36 per cent) using them to help make their point and a fifth (20 per cent) believing emojis help them communicate more effectively than words.

EDF’s research found the other reasons preventing discussions around the climate challenge include not fully understanding what the UK is trying to achieve (18 per cent), concerns about not understanding the complexities (17 per cent) and not feeling there is a simple way of bringing it into daily conversation (17 per cent).

The research also revealed that a quarter (25 per cent) of Brits believe that introducing more emojis related to achieving Net Zero would make it easier to talk about the topic and a third (34 per cent) would be likely to use a Net Zero emoji if it was available.

Keith Broni, emoji expert and deputy emoji editor at Emojipedia, said of the campaign: “Emojis have become an integral part of modern conversation. Whether sending messages to friends or family, posting on social media or even sending a work email – they have become a key tool by which we communicate. Over the years, we have seen the emoji keyboard increasingly reflecting important social and cultural issues. However, EDF has noted that there are currently no emojis specifically related to one of the world’s biggest priorities: climate change. By proposing this range of climate-change related symbols, EDF could encourage people to discuss these vital issues and help the UK reach its Net Zero target."

The research further revealed that there is a widespread lack of understanding about the steps individuals can take to help the UK reach its Net Zero target. Despite 72 per cent of Brits agreeing that reaching Net Zero should be a global priority, only 55 per cent were aware they can personally help contribute. Only a third were aware that switching to an electric vehicle (33 per cent) or improving home insulation (32 per cent) would help.

Philippe Commaret, Managing Director for Customers at EDF added: “In order to tackle climate change, we need to get everyone speaking the language of carbon reduction. As we get closer to 2050, it’s more important than ever to have meaningful conversations with the people around us about the future of our planet.

“As Britain’s biggest generator of zero carbon electricity, we’re committed to helping Britain achieve Net Zero. As emojis continue to be such an important part of modern communication, we believe this new collection will help break down the barriers to discussing climate issues and encourage everyone to play their part in reducing carbon emissions.”

EDF has created 10 emoji designs – with two each depicting ‘Net Zero’, ‘carbon footprint’, ‘wind energy’, ‘nuclear energy’ and ‘solar energy’. Consumers will be able to vote for their favourite designs across EDF’s social media channels for the next five weeks. The designs that receive the most votes will be submitted as part of formal proposals to Unicode, for consideration in the official emoji keyboard.

‘Net Zero’ refers to achieving a balance between the amount of greenhouse gases we emit with the amount we remove. The UK government announced a target of Net Zero for UK greenhouse gas (GHG) emissions by 2050.

About EDF in the UK

EDF is helping Britain achieve Net Zero by leading the transition to a cleaner, low emission electric future and tackling climate change. We are Britain’s biggest generator of zero carbon electricity, meeting around one-fifth of the country’s demand and supplying millions of customers with electricity and gas.

With around 5 million accounts, EDF is one of the largest suppliers to British homes and businesses and a leading supplier of innovative energy solutions that are helping businesses become more energy independent. All of our home and small business customers get energy tariffs backed by zero carbon electricity as standard.

We generate low carbon electricity from eight nuclear power stations, more than thirty onshore wind farms and two offshore wind farms, and operate one of Britain’s biggest battery storage units, one gas and one coal power station, thousands of EV charge-points, and combined heat and power plants. Wind, nuclear and solar all produce electricity that is zero carbon at the point of generation and have similar emissions over the build, run and retire lifecycles.

EDF is one of the UK’s largest investors in renewables, with 1GW of renewable generation in operation and over 4GW in construction, planning and development across a range of technologies including onshore and offshore wind, solar and battery storage. We are constructing our largest offshore wind farm in Britain – the 450 MW Neart na Gaoithe project in Scotland which will be ready in 2023.

Our energy services business, Imtech, is one of the largest technical service providers in the UK and Ireland.

EDF is part of EDF Group, the world’s biggest electricity generator. In the UK we employ around 13,000 people.