As part of the construction of Hinkley Point C, we plan a second phase of dredging mud and sediment from the seabed off the Hinkley Point C site in 2021.

Further dredging is needed ahead of the drilling of six vertical shafts for the cooling water system, along with the installation of a fish recovery and return system and maintenance dredging at the jetty.

It is necessary to dredge the immediate area where we will be installing the vertical shafts and associated intake/outfall heads. As part of a planned multi-stage approach, dredging first began in September 2018 and contractors completed the first licensed work to dredge and deposit mud in the Severn Estuary.

Further dredging is required as the construction progresses and we will work closely with the appropriate experts to prepare our licence application and will again comply with all requirements. We also fully support efforts to inform and explain the dredging work to the public.

For this second phase of dredging we are proposing enhanced sampling and analysis with more samples taken, at greater depth and with a greater range of analysis.

EDF Energy is one of many companies - over many decades - dredging and depositing sediment in the Bristol Channel for industrial or construction purposes. 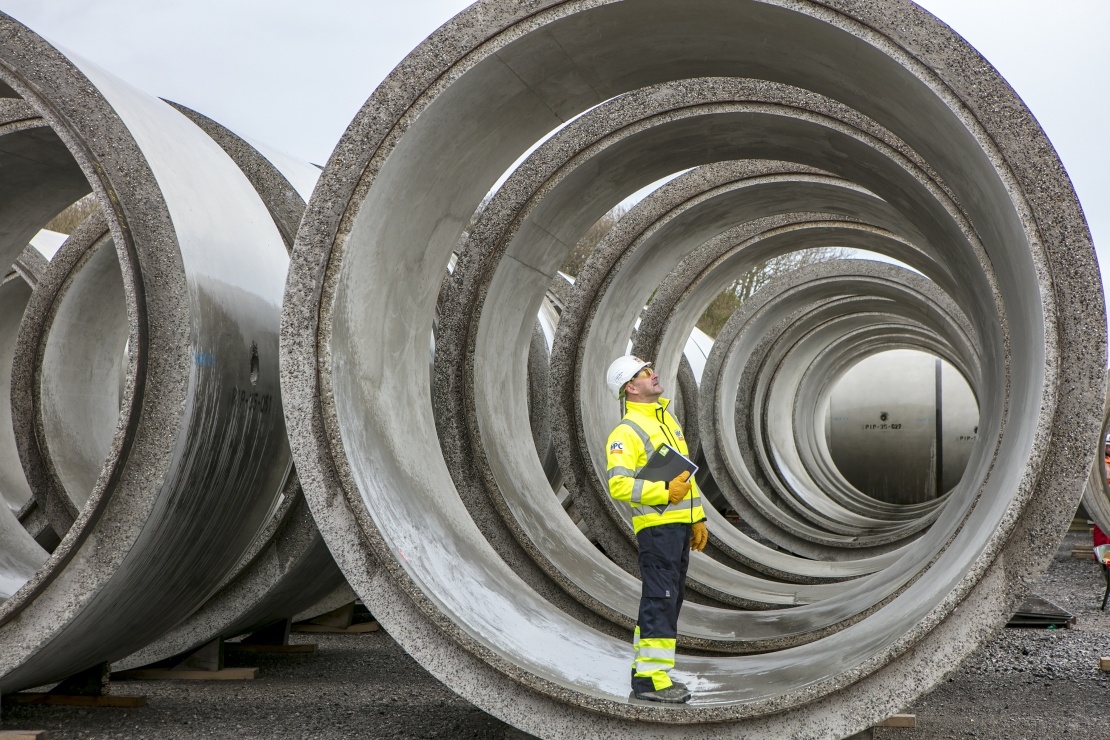 Following a successful dredging and disposal campaign in 2018, and further detailed design now being available, EDF are looking to secure permission to dispose of further dredged material within the Severn Estuary. The Cardiff Grounds remain the most suitable site for disposal of this material.

To further inform and reassure the public, Natural Resources Wales has launched a six-week public consultation on the sampling and testing of sediment with specialists including the Centre for Environment, Fisheries and Aquaculture Science (Cefas), ABPmer and the Environment Agency.

The consultation concerns proposals for an enhanced monitoring programme. No dredging activity is planned until 2021 - once an appropriate sampling and testing plan has been approved, the results analysed, an application made, and a licence issued.

Detailed information on the consultation is available directly from Natural Resources Wales. 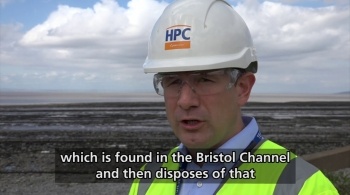 Is the mud and sediment radioactive?

The sediment is typical of sediment found elsewhere in the Bristol Channel, and under UK law it is not radioactive.

Radioactivity occurs naturally, including in foods we eat, and can be artificial/produced by human activities. Any sediment in UK coastal waters will contain naturally occurring levels of radiation, and in areas of industrial activity there may be extremely low levels of artificial radiation present.

In the case of the Bristol Channel, the very low levels of radioactivity identified in the sediment are predominantly naturally occurring, with a small amount of artificial radioactivity, which will have originated from legacy discharges from hospitals, medical isotope manufacturing facilities (including those formerly based in Cardiff) and nuclear facilities. Whether the radioactivity is naturally occurring or artificial this has no impact on how it interacts with the human environment.

The tests were carried out by CEFAS, an executive agency of the UK Government. CEFAS has some of the most advanced radiation testing equipment in the world and also provides services to Natural Resources Wales and the Welsh Government, as well as the Marine Management Organisation. 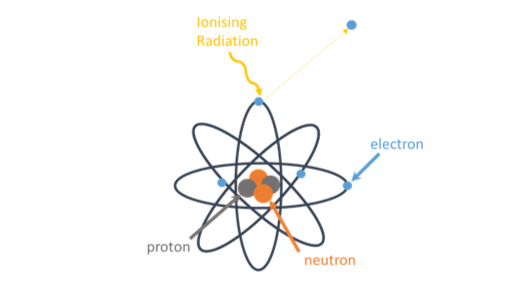 We often hear the word “radiation” but what actually is it?

Radiation is energy emitted from a source such as heat or light from the sun, microwaves from an oven or x-rays from an x-ray tube.

The type of radiation people often refer to in relation to nuclear power is sub-set of this called “ionising radiation”. This is electromagnetic waves or particles with sufficient energy to directly or indirectly knock electrons out from an atom or molecule, producing ions.

The atoms of some elements found in nature or produced artificially are slightly unstable and to achieve greater stability, the emit ionising radiation. These atoms are referred to as radioactive.

There are multiple sources of ionising radiation in everyday life:

In order measure exposure to ionising radiation the term “dose” is used, this has the units of a mSv (milli-Sieverts). The graphic below shows a comparison of dose by various activities.

The upcoming 2020 sediment sampling proposal has been designed to update and build upon previous sampling results. In addition to  satisfying scientific and regulatory requirements, the widened scope for the 2020 sediment sampling includes the collection and analysis of additional samples from depth (until bedrock is reached, or up to 9m maximum depth below chart datum).

How thorough will the tests be?

When testing the sediments, the type and energy of radiation, along with the composition of the sample being measured effects how easy it is to measure the amount of radioactivity.

Generally, a radioactive atom emits either an alpha or beta particle. This is usually accompanied by a gamma-ray.

Due to this fact, the most common means of measuring radiation is to use a technique called gamma ray spectroscopy. This allows you to detect the majority of alpha, beta and gamma emitting radionuclides, identify the radionuclides present and measure the amount radioactivity.

As some radionuclides only emit alpha or beta particles, with no gamma-ray, there are some cases where additional testing may be needed, however this is usually not required.

In the case of the sampling of the sediments at Hinkley Point C, the testing and sampling plan was developed independently by CEFAS (an executive agency of the UK Government), which carries out work to the highest international standards.

The analysis techniques include the use of high resolution gamma-ray spectroscopy, allowing the identification of a wide range of alpha, beta and gamma emitting radionuclides, and thorough assessment of any radioactivity in the sediment.

Additional reassurance monitoring is to be undertaken as part of the 2020 sampling campaign to determine the presence of pure alpha emitting radionuclides. This will reaffirm the suitability of high resolution gamma-ray spectroscopy providing a thorough assessment of any radioactivity in the sediment.

The depth of tests

The sediment has previously been tested at depth. In 2009 CEFAS obtained sediment samples at depths up to 4.8m to support the HPC Planning Application. No artificial radioactivity was observed below 2m. This is likely because any sediment at a depth of greater than 2m depth will have accumulated hundreds if not thousands of years ago, prior to the start of industrial activity in the area.

An enhanced sediment sampling plan has been developed for the next phase of dredging which will take testing even deeper. Surface sampling and sediment samples at depths of up to 9m are planned across 35 sampling stations.

In areas not previously dredged (known as capital dredging locations) the cores will extend to the maximum dredge depth, or until expert geotechnical examination reveals that undisturbed geological material has been reached, or the sample consists almost exclusively of sand, gravel or rock. The maximum core length will be 9 m, despite the understanding that sediment found at depths greater than 2m will have no artificial radioactivity.

Surface samples will also be taken from areas previously dredged during the 2018 dredging campaign (known as maintenance dredging locations). In the case of the dredge depth being greater than the 2018 dredge depth, sampling stations will be sampled according to the capital dredge methodology, described above (i.e. to a depth of up to 9m).

A primary reason of increasing sample depths from previous sampling campaign (max 4.8m) is to provide reassurance that this material remains suitable for disposal to sea, and poses no threat to human health or the environment.

Radiological impacts of the disposal

Taking account of the natural and artificial radioactivity together, and based on the results of previous analysis, the dose received would be:

40 times less than the dose received from a transatlantic flight

Equivalent to eating 20 bananas per year

3,500 times less than having a chest CT scan

This is an infinitesimally small level of exposure to radiation, far below the threshold requiring a more detailed assessment or even close to approaching a radiation dose that could impact human health or the environment.

Why use Cardiff Grounds?

Why is Cardiff Grounds being used?

While there are other licensed disposal sites in the Channel, the Cardiff Grounds is the only suitable site large enough to handle the amount of the type of sediment we will dredge, and as the sediment was confirmed to pose no environmental or health risks.

Cardiff Grounds has been a licensed disposal site since the 1980s, and takes on average 1,500,000m3 of sediment each year. It is important to emphasise that EDF is not the only company licensed to use the Cardiff Grounds - the site will have received several million cubic metres of dredged sediment from other parts of the Bristol Channel over several decades.

Cardiff Grounds is the closest site to the location of the offshore dredging operations planned in the Bristol Channel. Disposal within close proximity to the dredged site(s) will result in a lower carbon-footprint due to less distance being travelled by vessels, and therefore lower overall emissions.

Why don’t you use another location? 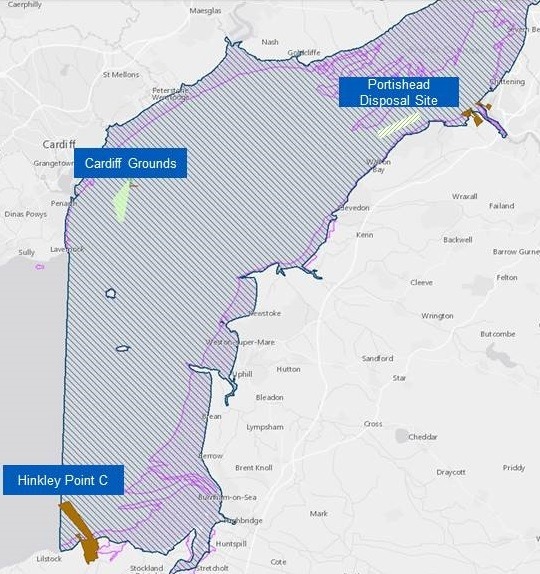 The area we are dredging is within a recognised Special Area of Conservation (SAC). Any sediment removed from this area, must be put back into this area in order to maintain the natural balance of sediment in the SAC.

Within this SAC, the Cardiff Grounds are the largest and only suitable grounds to deposit sediment from EDF Energy and other companies conducting dredging in the Channel.

How does Wales benefit from Hinkley Point C?

As well as being part of the National Grid network that will benefit from the affordable and reliable low carbon electricity produced by Hinkley Point C, Wales is benefiting during its construction.

Apart from local workers at the Somerset site, the largest group of employees come from Wales – over 1,000 Welsh residents worked on site each day during the earthworks phase.

More than 200,000 tonnes of Welsh steel are being supplied to the project and valuable contracts have already been awarded to over 200 Welsh companies in areas including steel fabrication, training, engineering, scaffolding, water management, transportation and site services.

Are you consulting on the proposed sediment sampling and analysis plan?

In addition, a separate Marine Licence application has been submitted to the Marine Management Organisation (MMO) for approval to undertake the sampling works in English waters (Ref: MLA/2019/00329). This application is also based upon the same Cefas’ TR502 sampling plan.

Will the raw data from the 2020 testing be made available?

For surface samples it is necessary to repeat sampling after a certain period because the surface sediments are mobile. However, subsurface core samples do not have the same time sensitivity, as material would not have been disturbed, and therefore the 2009 results will remain valid.

Due to the mobility of sediment found in the surface layers it is standard practice to take repeat surface samples every 3 years.

The best way to contact us is by completing our online enquiry form.

If you have a question about your EDF bill or account, contact our customer services team on 0333 200 5100 or find out more here.