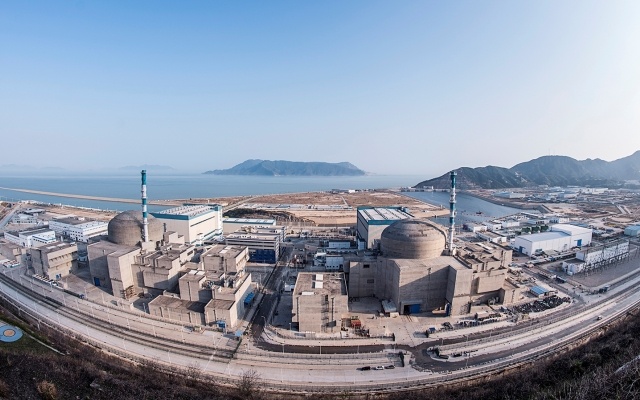 The second EPR reactor at China’s Taishan nuclear power plant is about to enter into commercial operation.
View | Download (839.36 KB)

This step marks the achievement of all prerequisite conditions for the second reactor’s safe operation just nine months after Unit 1 was commissioned.

Comprising two 1750-MW EPR reactors, Taishan nuclear power plant is the biggest cooperation project to have taken place between China and France in the energy sector. Taishan’s two reactors are capable of supplying the Chinese power grid with up to 24 TWh of CO2-free electricity a year, tantamount to the annual electricity consumption of 5 million Chinese users, whilst at the same time preventing the emission of 21 million tons of CO2 a year.

The Taishan project is led by TNPJVC, a joint-venture founded by CGN (51%), EDF (30%) and the Chinese utility Guangdong Energy Group (19%). The EDF Group and its subsidiary Framatome supplied the EPR technology for the plant. The project capitalised on 35 years of strategic cooperation between EDF and CGN, as well as operating experience from the Flamanville 3 EPR and the complementarity between the French and Chinese nuclear sectors.

Experience acquired through the commissioning of the first reactor on 13 December 2018 allowed to reduce by 3 months the period between the fuel loading and the plant’s entry into commercial operation, whilst sustaining identical safety conditions. This performance demonstrates the potential to optimise future EPR construction sites. Since it was commissioned, reactor No.1 has achieved excellent operational results.

The Taishan project is providing EPR reactors around the world with its experience in project management and technological expertise. The first reactors to benefit from this experience are the two Hinkley Point C units currently being built in the UK. The two companies are also partners in the Sizewell C EPR project, as well as in the Bradwell B project which is based on Hualong technology.

Jean-Bernard Lévy, the EDF Chairman and CEO stated: “Start-up of the world’s second EPR at the Taishan site, combined with the excellent operational performances achieved at Unit 1, are testament to the quality of the reactor design and confirm the industrial feasibility of projects undergoing development. The success of the Taishan project is the result of a long and fruitful cooperation between EDF and CGN and more widely in the French and Chinese nuclear sectors. Safe and competitive, EPR technology is an increasingly important asset to make the global energy mix totally carbon free.”

A key player in energy transition, the EDF Group is an integrated electricity company, active in all areas of the business: generation, transmission, distribution, energy supply and trading, energy services. A global leader in low-carbon energies, the Group has developed a diversified generation mix based on nuclear power, hydropower, new renewable energies and thermal energy. The Group is involved in supplying energy and services to approximately 39.8 million customers, of which 29.7 million in France. The Group generated consolidated sales of €69 billion in 2017. EDF is listed on the Paris Stock Exchange.

(1) Customers are accounted for as at end of 2018 per delivery site, whereby a customer may have 2 simultaneous delivery points: one for power and the other one for gas.

Framatome is a major international player in the nuclear sector, recognized for its innovative solutions and its technologies that provide massive added-value for the design, construction, maintenance and development of the global nuclear fleet. The company designs and manufactures components, fuel, I&C systems and offers a full range of tailor-made services for reactors. With some 14,000 staff across the globe, Framatome customers enjoy its expertise on a daily basis, helping them improve the safety and performance levels at their nuclear power plants and meet their economic and societal objectives. Framatome is owned by the EDF Group (75,5 %), Mitsubishi Heavy Industries (MHI 19.5 %) and Assystem (5 %).

The second EPR reactor at China’s Taishan nuclear power plant is about to enter into commercial operation.
View | Download (1.61 MB)