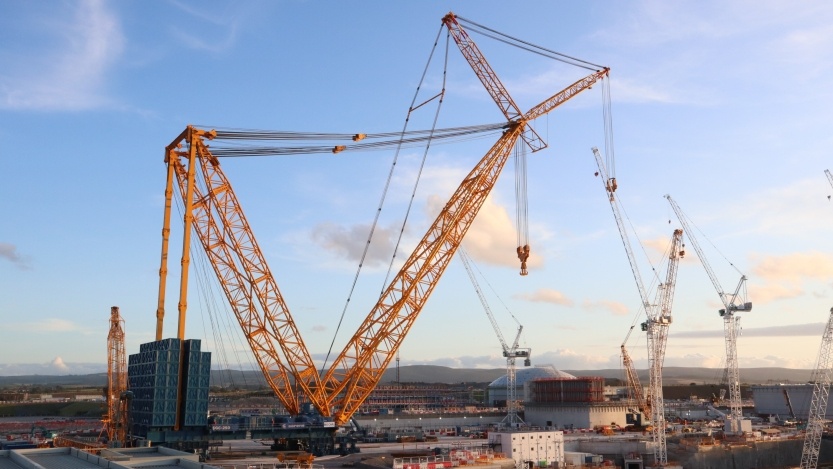 The world’s largest crane is ready to start work at the Hinkley Point C nuclear power station site. Able to stand up to 250m tall, “Big Carl” can reach higher than the tallest tower at London’s Canary Wharf and can carry 5,000 tonnes in a single lift.

The new Sarens SGC-250 crane was shown off on-site at Hinkley Point C today where it will be used to lift large prefabricated sections of the power station into place. The crane was developed to support the growing trend towards modularisation in big construction – and its deployment allows Hinkley Point C to exploit this innovation on a large scale.

The crane’s huge size and capacity allows large components to be built in covered factory conditions on site, improving quality and saving time. The success of prefabrication has already been proved during construction of the two operational EPRs built by EDF and CGN at Taishan in China. Its use at Hinkley Point C is another example of the innovation made possible by experience gained and applied from other nuclear construction projects.

The Sarens SGC-250 in numbers

The SGC-250 runs along six km of rail track and will lift 700 pieces, with a maximum weight of 1,600 tonnes. At 40 metres radius, the crane can lift the equivalent of 32 single-storey houses or 1,600 cars. It was brought to Hinkley Point C in 280 loads from its base in Antwerp via Bristol Port’s Avonmouth Docks. The port is also handling aggregates being brought to the site by sea and large loads like the tunnelling machines.

Rob Jordan, Hinkley Point C Construction Director said: “The crane is an impressive piece of kit and a world beater. It allows us to innovate in the way we build the power station, lifting complete pieces out of our factory bunkers and into place across the site. Pre-fabrication helps us boost quality, gives better conditions for skilled workers and saves time – that’s good news for the project and an example of learning lessons from success at other projects.”

BYLOR – a joint venture between Laing O’Rourke and Bouygues TP will use the SGC-250 as they complete the main civil engineering works at Hinkley Point C. Martin Westbury, BYLOR’s Construction Director said: “BYLOR are proud to bring the world’s largest land-based crane to the UK for the first time. We will use the SGC-250 crane to lift more than 700 pre-fabricated elements; including the five major sections of the steel containment liner and dome for each reactor building.” 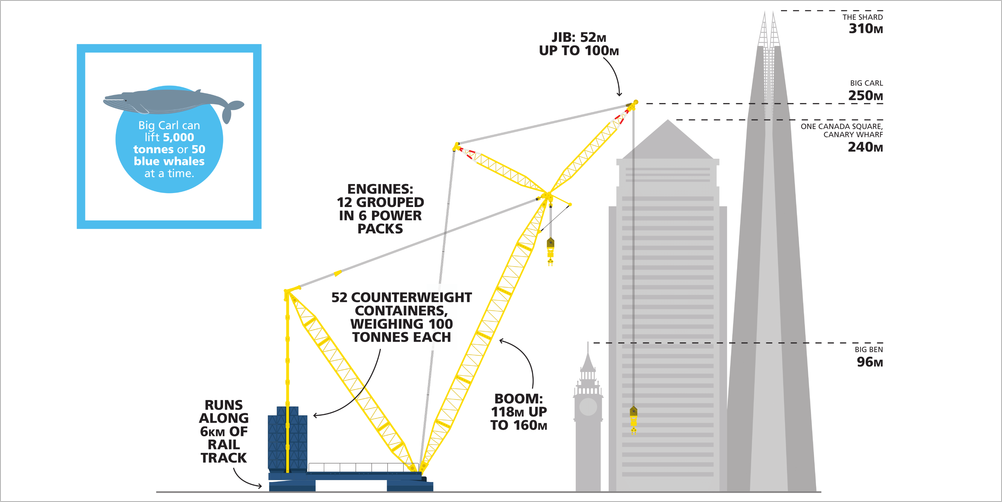 The crane is named after Sarens Director of Technical Solutions, Carl Sarens who said: “The SGC-250 is a game changer. Sarens is proud to have conceived its design, designed it, and built it. We believe that this creation will serve Hinkley Point C and other sites around the world like no other crane can”.

Cllr David Hall, Cabinet Member for Business and Inward Investment at Somerset County Council said: It’s great to see leading innovation in construction happening right here in Somerset. This project presents a fantastic opportunity for our local HPC workers to upskill and will only accelerate the rapid progress already being made on site at Hinkley Point C.

Hinkley Point C’s reliable low carbon electricity will play a vital role in helping the UK tackle the climate change crisis. With a large expansion of renewables, nuclear will make net-zero decarbonisation possible, reducing the cost of periods with too much or too little wind and sun and ensuring a secure supply.

Innovations such as the increased use of prefabrication and the transfer of design, skills and experience from Hinkley Point C will provide a direct benefit to the proposed near-identical project at Sizewell C in Suffolk, making it cheaper to build and finance.