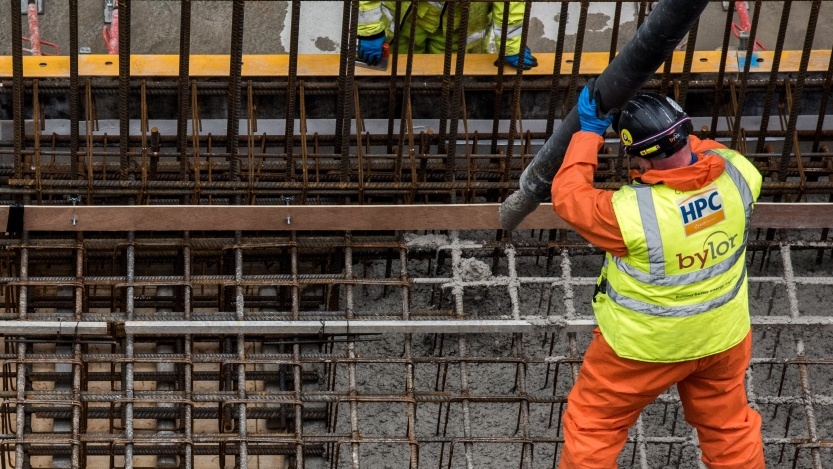 A lot has happened in the last six months since we signed the final contracts for Hinkley Point C. For one thing, the framework for the first new nuclear power station in a generation is quite literally taking shape right here in Somerset.

It’s no easy task building a power station. It takes planning, dedication and teamwork, as well as lots of energy and commitment.

As well as being a first for our project team, it is also the first nuclear safety concrete to be poured for a new nuclear power station in the UK for 30 years.

The first pour took around five hours and involved the equivalent of 20 mixer truck-loads of concrete.

But what is nuclear safety concrete and why is it so important to the project?

Well, it’s taken us around three years to get to this point. And that’s just the concrete. We have our own testing lab on site and the team has worked tirelessly to meet the rigorous standards and quality needed. This process was overseen by our independent regulator, the Office for Nuclear Regulation.

The term “nuclear safety concrete” relates to the consistent production of the concrete to ensure each and every truck-load is exactly the same as the first, the next and the last. There is a precise mix which has to be followed every single time, down to the very last drop.

And that first pour is so important for everyone involved in the project as it marks the start of construction of the galleries and sub-structure for the power station. This is the first piece of permanent construction on site and is a major achievement.

It also makes me extremely proud to be the construction director for such an exciting project.

Achieving the first nuclear concrete pour is testament to the hard work by all our teams who have shown such commitment to get to this point.

But HPC is far more than concrete

We already have 1,600 people working on site every single day, and we have excavated a staggering 3 million cubic metres of material.

We now have 60 big pieces of plant equipment on site and 32 different companies are working with us to deliver the build.

The first two of more than 50 tower cranes are now standing proud against the skyline. The larger of the two cranes is 40 metres high, boasts a 60 metre jib and has a lifting capacity of up to 16 tonnes. Both will serve a new metal workshop and formwork facility which will be built in over the coming months.

Work has started on a new sea wall and as well as our own dedicated concrete batching plant, we’ve also got a permanent aggregate store which will hold a whopping 57,000 tonnes of aggregate.

And that brings me neatly to our temporary jetty. That’s how most of the aggregate will arrive at site.

The jetty will enable us to bring significant volumes of construction materials by sea as part of our transport strategy of minimising traffic on local roads.

In all, some 80 per cent of the aggregates needed to build the power station will be brought in by sea rather than by road.  Every shipload of sand, cement and aggregates will be the equivalent of taking 250 lorry-loads off local roads. I’m really proud of that as our neighbours and local community are extremely important to us.

The jetty is being constructed from the coast outwards and will stretch 500 metres into the Bristol Channel. A 30-strong construction team is working on two barges to build it - an eight-legged jack-up barge called WaveWalker 1, which arrived at Hinkley Point C at the end of November 2016, and Fugro 1200, which arrived on site in December 2016.

At peak construction, we’ll have 5,600 people working on site and 510 of those will be staying with us, living in a purpose-built accommodation campus at one end of the HPC site.

The 4.3-hectare plot is ready and waiting to take delivery of the individual units which will form the campus.

The campus will also have a canteen, laundry services, gym and recreational facilities as well as administration offices. Outside there will be two all-weather sport pitches, 350 car parking spaces, including motor cycle and bicycle parking spaces as well as a bus drop-off point.

It won’t be long before I’m writing another blog to update you on even more of our achievements as huge progress is being made daily here at HPC. We are proud to be building the next nuclear power station in a generation here in Somerset.

Fundraising and donations support the NHS and local hospice
One of the largest contractors on the Hinkley Point C project, Bylor, have been working as a team to raise vital funds and donate supplies to those in need.

Industry-leading mental health work at Hinkley Point C recognised with award nomination
EDF’s Mental Health Buddies network at the Hinkley Point C power station has been nominated for Employee Network of the Year in the This Can Happen Awards.
More news