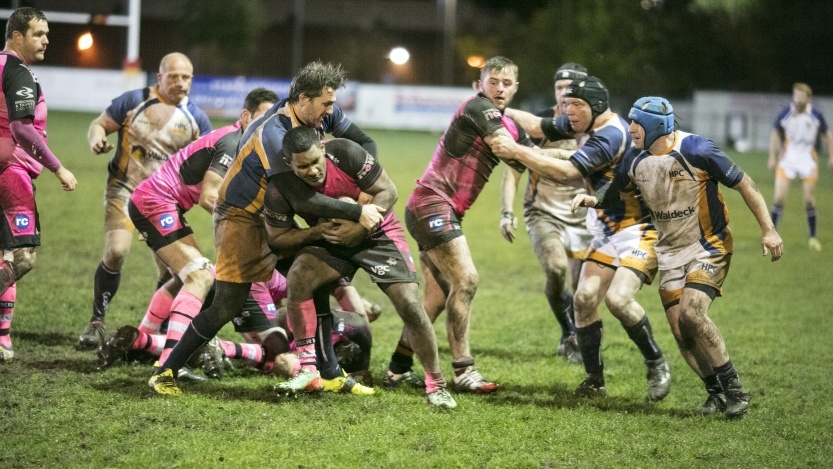 Players from the Hinkley Point C project battle it out on the pitch to raise money for Breast Cancer Now.

Rugby players from EDF Energy’s Hinkley Point C project have raised around £10,000 for the company’s charity partner, Breast Cancer Now, after a hotly-contested charity match at Bridgwater and Albion RFC.

An NNB (Nuclear New Build) Barbarians side made up from EDF Energy staff took on an HPC Tier 1 Tigers team of contract partners from the project, including Kier BAM, Bylor and Costain.

And despite appalling weather, both teams rose to the occasion as weeks of training paid-off and the two sides each held their own in a close-fought first half.

NNB Barbarians scored the first try before the HPC Tigers came back to see the sides ending the first half with five points apiece.

But it was the HPC Tigers who pulled away in the second half to win the match 31-10, cheered on by more than 300 spectators.

“With match funding from EDF Energy, BYLOR and Kier BAM, the money raised from the fees and programmes bought by the spectators should total around £10,000 for EDF Energy’s charity Breast Cancer Now.

“It’s important to raise awareness of this disease as almost everyone has a friend or relative affected by it. A huge thanks to all our sponsors and donations”

Co-organiser Jonathan Davies, of contract partner Kier BAM, said: “The commitment and effort shown by all involved was thoroughly commendable and the team spirit which has been created has been nothing short of amazing.

“The match itself was a hard fought battle and only opened up in the second half once the weather subsided.

“But the main thing was that a considerable amount of money was raised for Breast Cancer Now which is what the game was all about!”