The two EPR nuclear reactors at Hinkley Point C will provide the UK with reliable low carbon electricity to meet 7% of the UK’s needs.  Although tailored to British nuclear regulatory requirements, they are almost the same as EPR reactors being built by EDF and its partners in France and China. Recently there’s been a lot of discussion about the EPR design. Some critics claiming it is too complex and difficult to build.

Our Engineering Director, Robert Pays, addresses these views and sets out some facts about the EPR design.

Sizewell B was supposed to be the first of a new generation of nuclear power stations, with one of 10 PWRs announced by Energy Secretary David (now Lord) Howell in 1979. But a short term drop in energy prices in the early 1990s meant these plans were abandoned.

We’re now paying the price: Sizewell B will be the only one of the UK’s current nuclear power stations still producing electricity by 2035.  This leaves us a yawning gap to fill. EDF Energy is planning to fill that gap with four EPRs in the UK, two at Hinkley Point B and two at Sizewell C.

It’s true that there have been problems building the first EPRs and Hinkley Point C will benefit from the experience gained at these pioneer projects at Flamanville in France and Taishan in China. However most of the problems were related to the fact that the design was not sufficiently advanced before the construction began. They are impacted by the difficulties of relearning new nuclear construction after a 15 year pause in France. The unique standards and certification required in nuclear construction have had to be re-mastered, as have the complexities of these giant construction projects. Now these skills have been understood through the experience of construction and from all the lessons learned building other EPRs around the world. the nuclear industry and its suppliers will be stronger and more capable in the future. In Britain Hinkley Point C will bring jobs and skills to the nuclear and construction industries and for the benefits of future projects,

France saw these benefits when its new reactor programme was last underway. It’s an obvious thing to say but the last of the 58 reactors was easier and faster to build than the first.

There are other benefits that Hinkley Point C’s EPR design will enjoy. The UK regulator has approved the design through a process called the Generic Design Assessment and EDF has been clear that a stable design. means that when we start, we can continue construction without stopping. 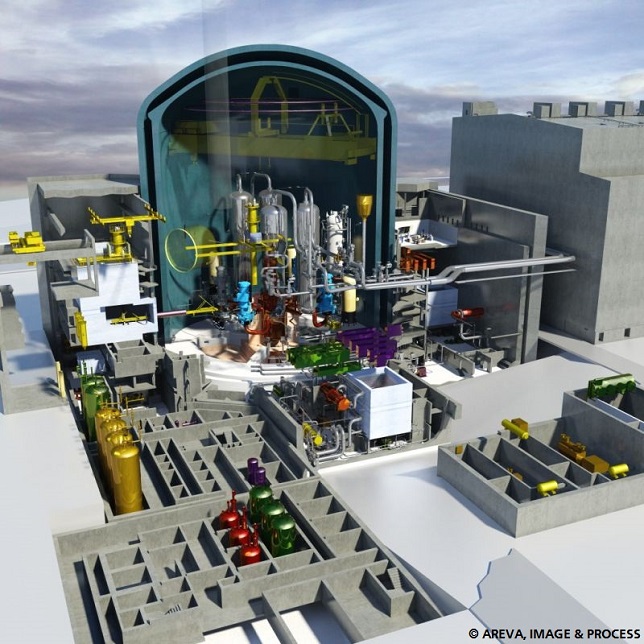 Computer-generated image of the EPR reactor

Challenge two – there’s too much risk for the UK taxpayer

At Flamanville all the main civil works have been completed which means we are on target to fuel and generate first power from the reactor by the end of 2018. The twin EPRs being constructed in Taishan by our partners CGN are due to come online next year. The first reactor is already undergoing testing ahead of commercial operation scheduled for the first half of 2017. The second reactor is in the “equipment installation” stage and is expected to be producing power in the second half of 2017.

This experience is a huge advantage for Hinkley Point C.

In addition, we have used technology to help us including advanced 3D/4D design tools.

That means we know the position of every nut and bolt we need to put in place - we’ve effectively already built our Hinkley Point C EPRs in digital form - so we aim to be one of the best prepared new nuclear project.

All big projects carry risk and the success of a project depends on controlling and anticipating those risks.  The nuclear expert Yannick d'Escatha was asked by our Chairman Jean-Bernard Lévy to review the Hinkley Point C plans at the end of 2015.  He reported: “My team did not find any major risks which had not been identified already and dealt with”. He made some recommendations for further improving the project and all of his recommendations have been adopted.

All of this has given EDF and its Chinese partner CGN the confidence to take the construction risk for the project. The people who really know the EPR through building itbelieve in its success. The UK consumer and taxpayer will take none of that risk.

Challenge three – we can wait for new, simpler or homegrown reactor designs

Some have argued we could just wait for other forms of reactor technology to come forward.  But like a lot of ‘easy solutions’, this isn’t a real answer.

There are no shortcuts.  All nuclear reactors have to go through years of regulatory approval and the power stations themselves require planning and environmental permissions, Government contracts and EU approvals.

And the UK EPR is the only reactor approved through the Office for Nuclear Regulation’s (ONR’s) Generic Design Assessment (GDA) process, which took four years.

We obviously think the EPR is best for Hinkley Point C and Sizewell C – it’s a third generation design incorporating the latest safety standards – but other reactors will be built because the UK needs a number of new nuclear power stations. But we can’t just wait for technologies that have yet to be approved or fully developed.

By the end of 2016, 31 power stations will have closed since the start of the decade – that’s 30% of the UK’s electricity generation capacity. By the end of 2030, a further 35% of capacity will close, including all coal, and all but one of our current nuclear power stations.