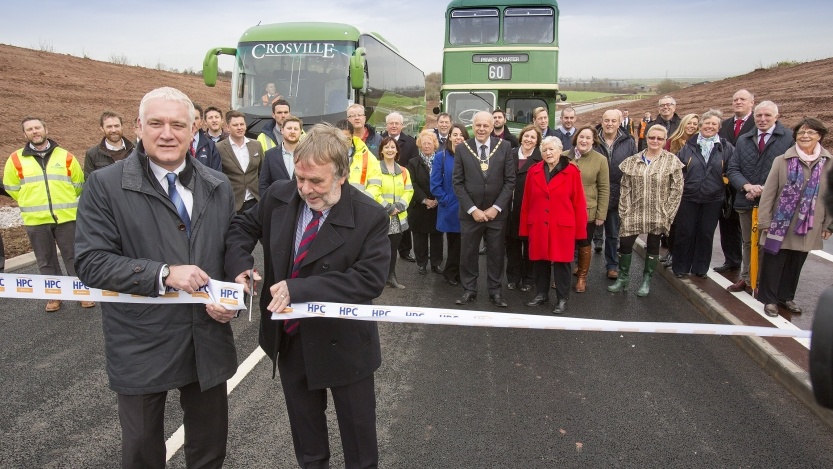 A new bypass to route traffic around the village of Cannington will be officially opened on Thursday (December 17).

The road links the existing roundabout on the A39 Cannington southern bypass with the C182 (Rodway) which leads directly to Hinkley Point.

EDF Energy has worked in partnership with Somerset County Council, district and parish councillors and contractor Aggregate Industries to design and construct the bypass.

It is part of a £16 million package of road improvements paid for by EDF Energy to provide a permanent lasting legacy from the new Hinkley Point C development.

Nigel Cann, Hinkley Point C site construction director, thanked local residents for their understanding during its construction. He said EDF Energy was determined to minimise the impact of the Hinkley Point C project by investing in local road improvements.

Mr Cann said:  “We have worked closely with local councils, organisations and residents to draw up a series of road improvements across the area. We listened carefully to the particular concerns of Cannington residents and came up with a scheme to take traffic away from the centre of the village.

“Our construction workers will use dedicated local bus services and park and rides to get to work, while deliveries of materials and equipment will also be managed carefully. However, it is important to consult with local people and invest in projects like the Cannington bypass before we start the main construction.”

It is anticipated that more than 80 per cent of the aggregate material needed for the Hinkley Point C project will come by sea rather than by road.

EDF Energy has invested significantly in a number of schemes ahead of the main works at Hinkley Point C to mitigate pressures on the local road network. These include new roundabouts on the A39 at Washford Cross and at Sandford Corner and road improvements at Taunton Road/Broadway in Bridgwater.

Cllr Colin Allen, chairman of Cannington Parish Council, said the parish council was delighted the bypass had been opened ahead of schedule.

He said: “It has always been our desire that this should be in place before the construction of Hinkley Point C started. The bypass is now there to be used before the main works commence and alleviates any serious problems that the traffic could have caused our village.

Somerset County Council will formally adopt the route as a public highway once all the work has been completed.

Cllr David Hall, Somerset County Council’s Cabinet Member for Business, Inward Investment and Policy, said: “The bypass has been an important element of the preparatory works that EDF Energy are progressing as part of Hinkley Point C and to see the end of its construction before the end of the year is brilliant news for all, particularly the residents of Cannington.”

The bypass is single carriageway, approximately 1.5km long and has a dedicated cycle/footway on the eastern side. A new roundabout joins it to the C182 at Rodway.

It will be open to traffic from December 17, with some landscaping and other works to follow the bypass coming into service.