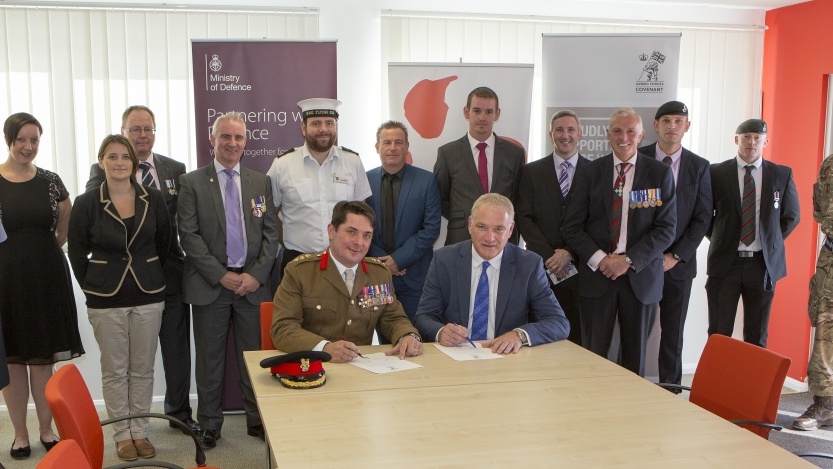 Bosses at EDF Energy have formally pledged their support to current and former members of the Armed Forces and their families, including reservists, by signing the official Armed Forces Covenant.

The document highlights the moral obligation owed to the Armed Forces by the nation and businesses signing-up to it are able to officially declare their own support for the military community.

As a responsible and equal opportunities employer, EDF Energy has committed to working more closely with past and present members of the Armed Forces to enable them to juggle military careers with civilian jobs or to find full-time employment once they leave the military.

Reservists already working on the Hinkley Point C project were encouraged to wear their military uniforms with pride for the event. There were also information displays about all three Armed Forces to encourage other C site workers to become reservists.

Colonel Coote said: “It is absolutely tremendous what EDF Energy and the Hinkley Point C team is doing to support our military personnel. They are setting a superb example and their approach is a great model for others to follow.”

There is already an established Forces Support Network at EDF Energy and staff work closely with the Careers Transition Partnership, an ex-military employment organisation, to maximise opportunities for the military community.

Signing the covenant enables EDF Energy to officially recognise the value serving personnel, reservists, veterans and military families bring to the company. Staff will also be able to promote the fact the energy company is Armed Forces-friendly.

Mr Cann said: “One of the great things about having an infrastructure project like Hinkley Point C is that we have the opportunity to be socially responsible and we are keen to do as much as we can to support our Service personnel, be they reservists or those coming out of the forces.”

A number of current and former military personnel already work on the Hinkley Point C project, including former Brigadier David Eccles, who is now the head of stakeholder engagement.

David joined the Hinkley Point C team after 30 years in the Army and said life in the services had prepared him well for the demands of his ‘civvy street’ role.

“I had wanted a job that was totally different to the military and count myself extremely lucky to have landed on my feet doing something that has stacks of variety, responsibility and challenge as part of Hinkley Point C.

“There are a huge number of other ex-military folk working on the project and we use a buddy-buddy system, teaming up a new ex-military employee with an existing ex-military member of staff to provide a degree of guidance in the first few months,” said David.