World Record holder Jenn has vice-like “grip” on her sport 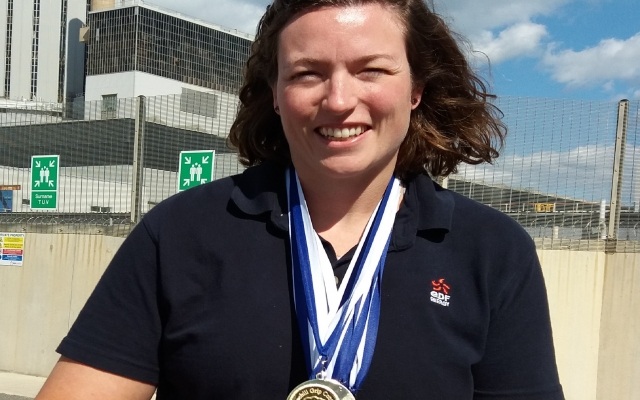 Dungeness B technician Jenn Tibbenham became a multi-medallist and world record holder at a recent international lifting competition in Finland.

Jenn, who works in Materials at the power station on the Kent coast grabbed no fewer than six medals – one gold, three silver and two bronze.

The 32-year old also broke a world record in one discipline – to add to an existing world record she holds – and set a new British record in another lift outside of the competition.

Jenn is a master of “Grip Sport”, which tests competitors’ ability to grip and lift different types of heavy apparatus, either for a length of time or above a certain height.

Jenn said: “It’s all about strength in the hands and wrists.”

“The sport is really popular in Scandinavia and North America - and is starting to attract a lot more competitors around the world.”

Her strict training regime consists of running, cycling and weight-lifting as well as yoga.

Jenn’s new world record is for lifting a weight of 131.1 kilos (nearly 289 pounds) using an apparatus made up of a two-handled thick bar device with rotating rollers.

Formerly a power lifter and participant in Strong Woman events, Jenn plans to compete in the international “King Kong” competition this autumn. She will compete in London while events take place simultaneously at venues across the world.

If she is successful, she hopes to be invited to represent Great Britain at a major lifting competition in St. Petersburg next year.

Jenn has already made a name for herself doing out-of-the-ordinary activities. She pulled a fire engine and took part in a lawnmower endurance challenge in Finland to raise money for EDF Energy’s charity partner Breast Cancer Now.