A team of workers from Hunterston B power station have raised thousands of pounds for a local hospice in memory of a much-loved colleague.

A group of ten from ‘C’ shift took part in the Tough Mudder challenge in Thornhill, Dumfriesshire, and raised £3679 for the Ayrshire Hospice.

They tackled 13 obstacles and a 5 mile run in memory of Anita Kerr from Ardrossan.  Anita worked in various departments at the station for 26 years and her husband Gordon still works with the team on ‘C’ shift.

Steven Duffy helped to organise the team, he said: “Gordon lost Anita to cancer in November 2016 and she is still sorely missed by us all. The Ayrshire Hospice charity provided essential care and support to Anita and Gordon during some extremely difficult moments and as a small token of thanks, Gordon nominated the hospice for our team fundraising effort.

“We’re delighted to have raised such a fantastic sum of money and hope it will help them continue their amazing and selfless charity work.”

The team had to wade through craters of shoe-stealing mud, scale 15ft tall walls and commando crawl under barbed wire to complete the course.

Stephanie McLaughlin, Fundraising Officer from the Ayrshire Hospice said: “We are extremely grateful to everyone who completed this challenge and would like to sincerely thank everyone who very generously sponsored the team and has helped to raise such a wonderful amount, in loving memory of Anita Kerr”.

The Ayrshire Hospice, which serves all of Ayrshire and Arran, first opened its doors in 1989 and has spent almost 30 years providing care and support for patients with life-limiting conditions and their families. It costs more than £7 million a year to fund the service.

You can find out more about the hospice and donate at www.ayrshirehospice.org. 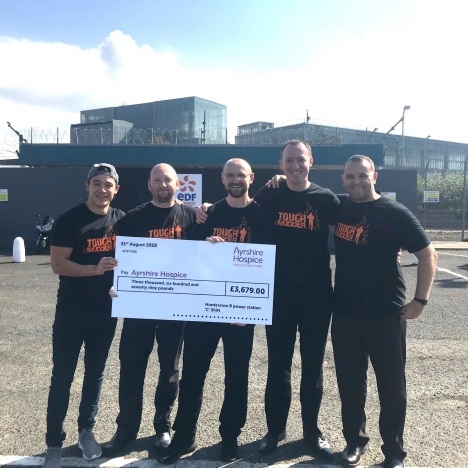