A group of female students from Edinburgh College have been given an insight into the world of engineering during a visit to Torness power station.

The group of 30 girls went on a behind-the-scenes tour of the power station taking in areas not usually accessible to the public including the turbine hall and charge hall where they were able to stand safely on the top of one of the reactors, which generates enough low-carbon electricity for 1 million homes. They also heard from some of the female engineers who work at the power station.

The visit is part of the power station’s efforts to encourage more females to apply for their apprenticeship programme. The four-year training opportunity sees apprentices spend the first two years at the National College for Nuclear in Somerset where they learn basic engineering skills in their first year, before specialising in their trade in the second year.

They also get opportunities to travel both in the UK and abroad as part of the ‘life skills’ element of the apprenticeship programme before completing the final two years back at Torness power station.

At the moment just one in four people working in STEM careers in Scotland is a woman and Engineering UK estimates that in this industry alone 124,000 new recruits will be needed each year until 2024 to meet job demand.

HR Manager Cris Martinez, said: “I’m delighted we were able to welcome this group from Edinburgh College to Torness. The number of women working in engineering is increasing but we are still facing a skills gap in the industry. If we are to address that we need to make sure that everyone has the opportunity to find out about the careers available to them and feels empowered to pursue them.”

“Everyone who came along seemed to have a great time and hopefully we’ve given them something to think about when it comes to making career choices in the future.”

To apply for an apprenticeship you need to have five National 5s including English, maths and two science or technical subjects. You can find out more about the apprenticeship programme, and enter your application, at: www.edfenergy.com/careers. 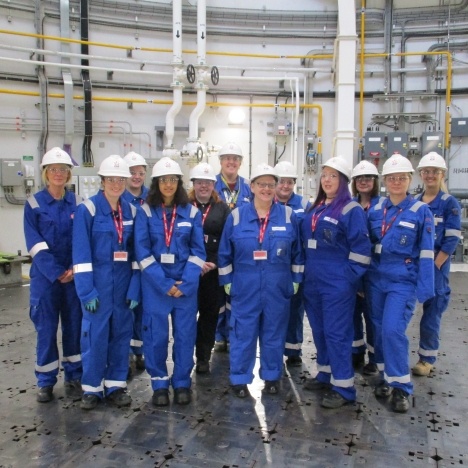