Staff at Torness power station in East Lothian have donated just over £10,000 to a cancer support centre which provides help to people in the area.

The Maggie’s Centre, which is based at the Western General in Edinburgh, gives people with cancer and their families a welcoming place to find advice and support.

Workers at the station raised £2,165 from fundraising activities, including a hamper raffle. The other £8,000 was donated from EDF Energy’s Scottish Charity Fund. The fund has provided £90,000 of funding, over the past year, to charities near its sites at Torness, Hunterston and East Kilbride.

Torness power station has also set up a Cancer Support Network for staff at the station. The Network aims to make “cancer at work, work” and can be accessed by anyone who has been affected by the condition; whether themselves, or a family member.

Station Director, Robert Gunn said: “I’m really pleased that we have been able to offer support to Maggie’s Edinburgh in this way. Most of us will be affected by cancer at some point in our lives so it’s crucial that people have a place where they can talk to those who have had similar experiences and get the advice they need to help them through such a difficult time.”

He continued: “That is also why I was supportive of a staff suggestion to set up a Cancer Support Network on site. Whether someone working here is living with cancer or supporting someone close to them we want them to know that we will work with them. There has been a really positive response so far with good attendance at drop in sessions.”

Mark Cooper from The Maggie’s Centre said: “Everyone at Maggie’s Edinburgh was blown away at the generosity shown by EDF Energy and its employees; Maggie’s relies entirely on the generosity of the general public and local businesses to continue supporting the thousands of families who are affected by cancer so, thank you!” 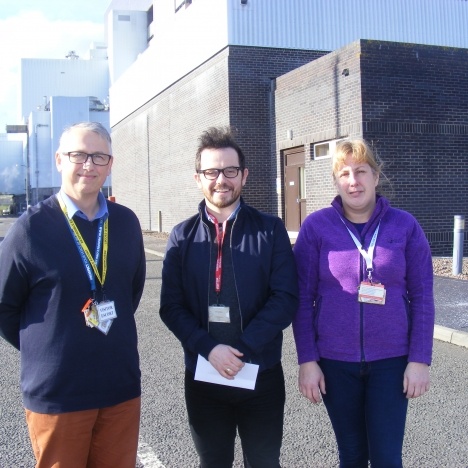