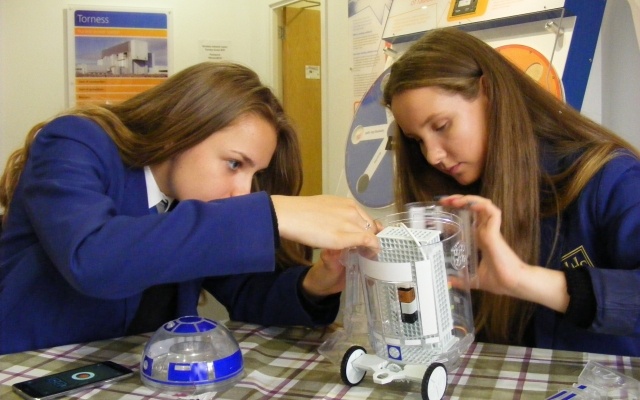 The activity is part of EDF Energy’s Pretty Curious campaign and was held to mark International Women in Engineering Day (#INWED) which took place on 23 June.

A group of Brownies and Girl Guides from North Berwick and pupils Larbert High School, Stenhousemuir, Newbattle High School, Dalkeith and Holyrood High School, Edinburgh came along to the events.

As well as going on a tour of the power station they had the chance to try some hands-on science, technology, engineering and maths (STEM) activities including taking part in a Build-a-Droid workshop. They were also able hear from some of the female engineers who work at the power station and explore the world of virtual reality through a 360degree film which takes you inside the core of a nuclear reactor to find out how it works.

At the moment just one in four people working in STEM careers in Scotland is a woman. The Pretty Curious campaign aims address the under-representation of women in these roles by encouraging girls’ curiosity for science.

Girl Guide, Jasmine Bouverie, said: “We really enjoyed all the different activities; our favourite was definitely the Build-a-Droid as we got to build our very own R2D2. It has given us the chance to think about STEM subjects.”

Hollie Renwick, Larbert High School, said: “ We have really enjoyed ourselves today, the virtual reality film was my favourite as it’s not something you see everyday.”

Research shows that over half a million job openings in science, research, engineering and technology will need to be filled over the next six years, to replace retiring workers but in engineering, for example, there is an estimated shortfall of people with the right skills of up to 60,000 a year.

Station Director, Robert Gunn, said: “I’m delighted we’ve been able to welcome these girls to Torness to mark International Women in Engineering Day. Engineering is a great career with many opportunities so it’s important we take any chance to help young women see what careers are available and how they could benefit.

“Everyone who came along seemed to have a great time and hopefully we’ve given them something to think about when it comes to make subject and career choices in the future.”

The company also provides gas and electricity to more than 118,000 Scottish customers and is the biggest supplier of electricity by volume in Great Britain. It is the largest supplier to British businesses, including supplying 98 per cent of public sector bodies in Scotland after being awarded the country’s largest electricity supply contract by annual volume from April 2013. It offers innovative energy systems for commercial customers and digital innovation for customers at home. EDF Energy has also launched its own innovation accelerator, Blue Lab, which focuses on making customers’ lives easier.

Through its Better Energy Ambitions, EDF Energy has developed comprehensive environmental and social programmes which have been recognised by a wide range of organisations.