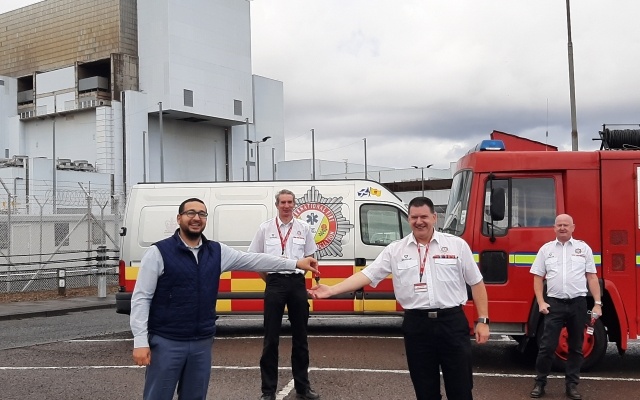 Torness nuclear power station in East Lothian has given its support to a specialist charity which aids fire services overseas.

The EDF power station maintains its own onsite fire engine which has recently been replaced with a newer model. The site decided to donate the outgoing tender to IFRA, which is based in Dunfermline.

Station Director, Tam Al-Bishawi, said: “I’m delighted that we have been able to help IFRA in this way. It was a privilege to be able to hand over the keys to the fire tender knowing that it will be going on to support IFRA’s aim of promoting and protecting the preservation of life.”

In 2017 the organisation started to run international fire training schools in Scotland with firefighters from around the world. The appliance from Torness will be used as part of this training.

Chairman, and founder of IFRA, David Kay OBE, said: “The IFRA assists in 21 countries and has sent 100 appliances worldwide along with 70 training missions and 60 containers full of equipment and uniforms. We do not receive any government funding and are solely dependent on donations and fundraising.”

“This appliance will be a fantastic vehicle for us to use and train international firefighters in modern techniques that they can apply in their own home countries allowing them to save lives and stay safer whilst carrying out their duties. EDF working in partnership with IFRA will be responsible for making these firefighters better, safer firefighters.”

This is not the first time Torness has supported IFRA. Donations of equipment and uniform have been made in the past, which went to help services in South America and St Helena in the Atlantic.