More than 150 children have been learning about the benefits of a career in science, technology, engineering and maths (STEM) at the University of the West of Scotland’s Paisley Campus.

The University hosted the SmartSTEMs event today which was supported by headline sponsor EDF Energy.

The pupils aged between 10 and 14, from schools across the area, heard from Yusra Omara from Scottish Water who spoke about her career in STEM. They also took part in a series of hands-on workshops including the Glasgow Science Centre’s FitLab which invited participants to become scientists; investigating and testing their limits by exploring their endurance, strength, agility, speed and coordination.

Research shows that over half a million job openings in science, research, engineering and technology will need to be filled over the next six years, to replace retiring workers but in engineering, for example, there is an estimated shortfall of people with the right skills of up to 60,000 a year.

Today’s session was one of 12 SmartSTEMs will deliver in partnership with EDF Energy before the end of the year, reaching up to 5,000 pupils.

EDF Energy’s Scottish Business Director, Paul Winkle, said: “EDF Energy hopes that by capturing their imaginations at events like this one more children will be inspired to study STEM subjects at school.

“Jobs in science, technology, engineering and maths are expected to grow at double the rate of other occupations but its projected that there won’t be enough graduates and apprentices to fill the roles. We are delighted to be working with SmartSTEMs and the University of the West of Scotland to try and change that.”

Professor Ian Allison, Dean of the University’s School of Engineering and Computing, said: “UWS is committed to developing and encouraging the best talent in science, engineering, technology and mathematics and we are delighted to be hosting this event at our Paisley Campus.

“The University is leading the way on attracting girls and women into STEM and this event will give female pupils from throughout the area an important opportunity to discover more about STEM subjects and the exciting career opportunities available to them in these areas. Working in partnership with SmartSTEMs is just one of the many initiatives the University has taken to encourage and enable pupils into these fields.

“Around the world girls go on to become engineers and scientists in equal numbers to boys, but in the UK just than one in four are female. We believe that this event will help to open up the opportunities to these girls – and in due course our society will benefit from the future technological developments that they will create.”

Stuart Macdonald, of SmartSTEMs said: “We are delighted to pull together many wonderful industry partners and scores of generous volunteers to deliver this great event for these young boys and girls. Proud to be playing our part in making Scotland a great place to discover and pursue STEM careers.”

Those at the SmartSTEMs session were also able to experience a virtual reality film that immersed them in the worlds of three successful women working in STEM-related industries. EDF Energy’s Virtual Reality film can be viewed at edfenergy.com/prettycurious 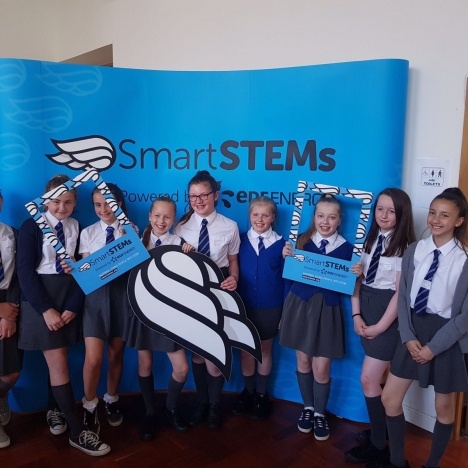