More than 150 children have been learning about the benefits of a career in science, technology, engineering and maths (STEM) at a college in West Dunbartonshire.

The pupils who were all in S1 at Clydebank High heard from Ross Smillie, Industrial Apprentice at NATS and Patrick Shearer, previous Science Modern Apprentice at West College Scotland. They also took part in a series of hands-on workshops including ones on NATS Continuous Descent Game and Dissection.

In the two decades to 2014, the number of high-skilled jobs in the UK has risen by 2.3 million and, in some sectors, employers are routinely reporting that they are struggling to fill positions. Research also shows that in engineering alone 124,000 new recruits will be needed each year until 2024 to meet job demand[1].

Today’s session was one of more than 20 SmartSTEMs plan to deliver in partnership with EDF Energy before the end of the year, reaching up to 5,000 pupils.

EDF Energy’s Scottish Business Director, Paul Winkle, said: “EDF Energy hopes that by capturing their imaginations at events like this one more children will be inspired to study STEM subjects at school.

“Jobs in science, technology, engineering and maths are expected to grow at double the rate of other occupations but its projected that there won’t be enough graduates and apprentices to fill the roles. We are delighted to be working with SmartSTEMs and West College Scotland to try and change that.”

Joe Harkins, Curriculum and Quality Leader from West College Scotland said: ‘The SmartSTEMs event was a great success with the pupils engaging in a number of exciting, hands on interactive workshops which has shown the pupils the range of STEM career possibilities, as well providing their teachers with stimulating new ideas on how to tackle the syllabus and facilitating many new connections to subject matter experts. It was great for the college to showcase their campus and work by having their students and staff run some of the workshops alongside industry members.”

Stuart Macdonald, of SmartSTEMs said: “We are delighted to pull together many wonderful industry partners and scores of generous volunteers to deliver this great event for these young boys and girls. Proud to be playing our part in making Scotland a great place to discover and pursue STEM careers.” 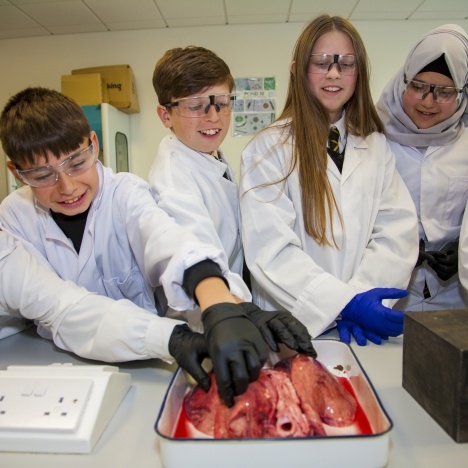 Pupils from Clydebank High in one of the workshops at the SmartSTEMs event
View | Download (2.21 MB)