Two Sizewell B employees have raised a staggering £6,200 for company charity Marie Curie on their quest to climb Mount Kilimanjaro.

Hazel Culshaw and Lana Challis from the Work Management team at Sizewell B power station pledged to climb Mount Kilimanjaro if they could reach their fundraising target of £4,500.

To celebrate surpassing the major milestone the powerful fundraising duo were invited to a special parliamentary reception held this week by EDF Energy to mark the first year of its charity partnership with Marie Curie Cancer Care. In 12 months the energy company and its employees have raised more than £349,000 for Marie Curie, which exceeds its target figure by nearly £150,000.

Lana and Hazel set off for the Kilimanjaro Trek on 13 February. It is a ten day trip, including six days trekking, taking in some of Tanzania's most spectacular sights before reaching the mountain's peak at 5895metres.

Marie Curie was selected as EDF Energy’s three-year charity partner in May 2013 by an employee vote, which more than 7,000 members of staff participated in. All of EDF Energy’s employees are encouraged to fundraise for the charity, and EDF Energy has pledged to match this fundraising by up to £100,000 for each year of the partnership.

The current fundraising total of £349,000, which includes employee fundraising and match-funding from EDF Energy, surpasses the company’s 12 month target by nearly £150,000. The money raised enables Marie Curie to fund 18 nurses to care for terminally ill people for one year.

EDF Energy employees from across the country have volunteered their time to fundraise for Marie Curie, organising events such as cake sales and raffles as well as sponsored marathons, mountain climbs, cycling events and swim-a-thons.

Vincent de Rivaz, Chief Executive, said: “We’ve seen overwhelming engagement from EDF Energy employees in our partnering with Marie Curie. The results to date are a testimony to this engagement.

“During a visit to Marie Curie’s Hampstead Hospice earlier this year, I have seen first-hand the vital work that this charity carries out. Marie Curie provides invaluable care and support to terminally ill people and their families. We’re very much looking forward to supporting this further in the next two years of our partnership.”

Fabian French, Director of Fundraising at Marie Curie, said: “Raising £349,000 is a massive achievement. We’ve been really impressed with the creativity that EDF Energy employees have shown in raising funds over the past 12 months.

"I would like to thank everyone at EDF Energy for the time and effort given to reach this amazing result. Their support will help us make a real difference to terminally ill people and their families across the UK.” 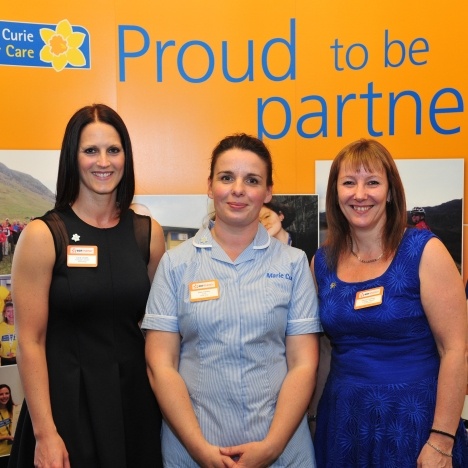