Rye Harbour Sailing Club’s meeting room is ship shape once again thanks to the efforts of a team from Dungeness B power station.

The group’s clubhouse needed sprucing up, and a 13-strong team from EDF Energy, which runs Dungeness B, and the power station’s key contractors Workplace Solutions and Cavendish Nuclear soon prepared and painted the room.

Alison Prentice, Dungeness B’s Visitor Centre Co-ordinator, said: “We pulled together the team as part of the site’s ‘Force for Good’ programme where we can offer a day or two’s support to a local charity.”

Janaan Hussain, who is on an industrial placement with the station’s environmental safety department and member of the company’s Young Professionals network helped to organise the event.

Janaan said: “It was fantastic to support a local charity and to see the difference the team made in improving their facilities.”

The sailing club is situated on the River Rother close to Rye Bay and prides itself in the diversity of its members’ sailing interests and the variety of classes offered.

Caroline Wylson of Rye Harbour Sailing Club, said: “We are very grateful to Dungeness B Power Station for its support of our charity, which was set up to get less able people out on the water sailing.”

Caroline said: “David and Jen also played a vital role in the galley providing bacon rolls and chilli con carne to ensure the team were well fed on the day.”

The next Sailability session is being held on Friday 22 September where they can proudly show off the newly decorated club room.

RHSC do need help running the monthly Sailability sessions, not only on the river, but also ashore in the club house, if you would like to volunteer please contact carolinewylson@btinternet.com or call 01797 223112 for a chat. 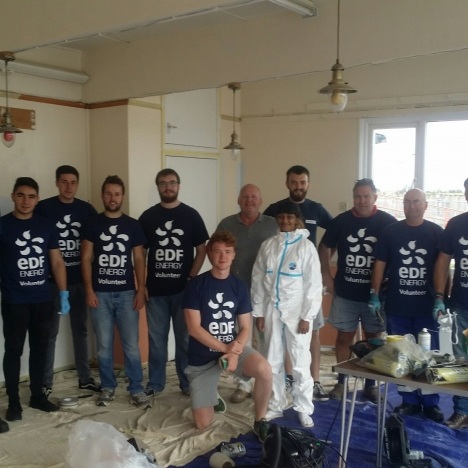 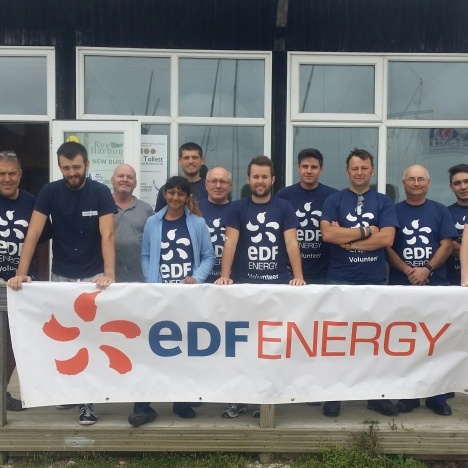 The team outside the RHSC clubhouse
View | Download (1.4 MB)