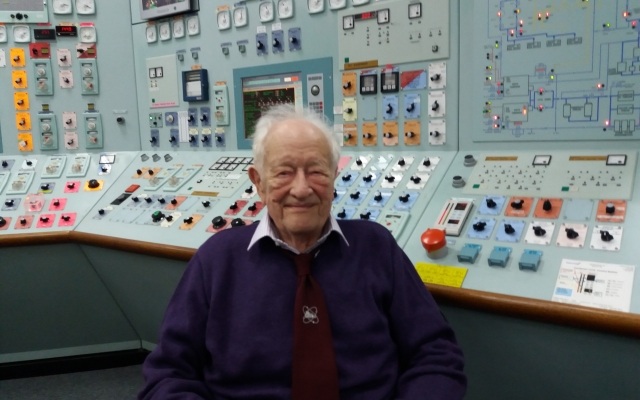 Raymond visited a replica of the control room that he was involved in designing
View | Download (3.4 MB)

90-YEAR-OLD Raymond Stanley was granted his wish to return to the nuclear power station he had a hand in designing after winning a Christmas wish competition at Kew House Care Home in Wimbledon.

Raymond was responsible for the co-ordination of all mechanical, electrical and civil design aspects of Dungeness B nuclear power station in the 1960’s and this was the first time he has visited the power station in almost 40 years.

“Coming back after all these years really brings back memories,” said Raymond, who donned his original Atomic Power Construction tie for the day. “I may be 90 now but I’m still 19 at heart and it’s great to see the place is still working.

“I am most proud of my work on the turbine hall that houses the two huge steam turbine generators and all their associated pipework systems. I worked on the design up in London and used to come down to Dungeness once a month but I haven’t been back since I finished working here in 1980.”

Joined by his son David and daughter Jackie, Raymond arrived in in style with in a Rolls-Royce provided by Hallmark Care Homes before being treated to a VIP tour of the power station, which has been owned and operated by EDF Energy since 2009.

Dungeness B Station Director, Ian Stewart, said: “We are delighted to have welcomed Raymond back to the power station after all these years and it’s thanks in part to his excellent design work that we are still able to safely and reliably generate low-carbon electricity for around 1.5 million UK homes.”

Lifestyles Team Leader at Kew House Care Home, Georgina Miller, said: “We were so thrilled when we found out that Raymond had been selected as one of the winners of our annual Hallmark Lucky Star competition.

“Raymond often talks about his time working for the power station and how lucky he was to have found a career that he truly enjoyed. Since he has returned from his trip, Raymond enjoys telling everybody about his special day out with his family and I think that this is a memory that will stay with him forever.”

Find out more about Dungeness B 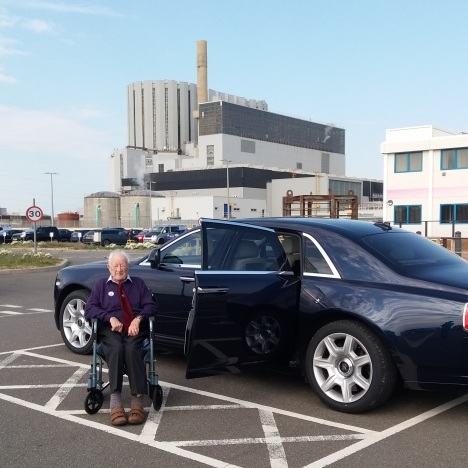