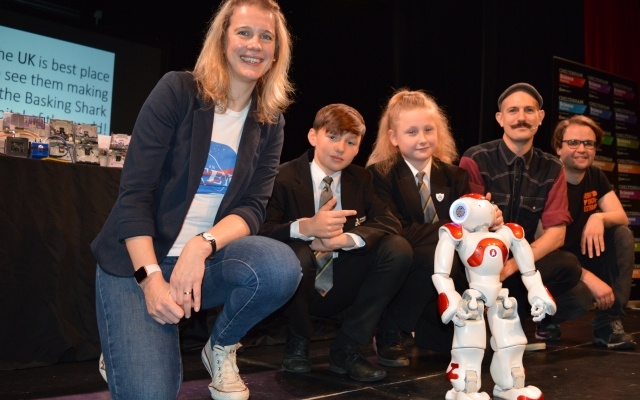 PUPILS from seven local schools were treated to a mix of punk rock, sea life and a robot orchestra as EDF Energy’s West Burton, CCGT and Cottam power stations teamed up with Cheltenham Science Festival.

Gaz Toyne, a Science, Technology, Engineering and Maths (STEM) Ambassador and Operations Technician for West Burton B CCGT said: “We were very entertained at the LabLive show and were thrilled to present the show to a full house both morning and afternoon, with 400 children in attendance.

“The children were clearly enthralled with both ‘Robot Orchestra’ and ‘Sea Soup’. Our hope is that they left the show with a little more ambition for careers in STEM subjects having been inspired by our expert presenters.”

Engineer Danielle George brought her ‘robot orchestra’ and explored the worlds of robotics, coding and sound. Using these futuristic recycled robots she demonstrated how engineering and computing have fused to take control of technology.

Marine microbiologist Russell Arnott talked about Sea Soup as he gave a guided tour around the thousands of tiny creatures in the oceans. This microscopic menagerie of mini-beasts help to provide the food we eat and the air we breathe.

“We know teachers value the LabLive sessions as they give their pupils the opportunity to see the fun side of STEM outside of the classroom. We are proud to support Cheltenham Science Festival in this excellent project.”