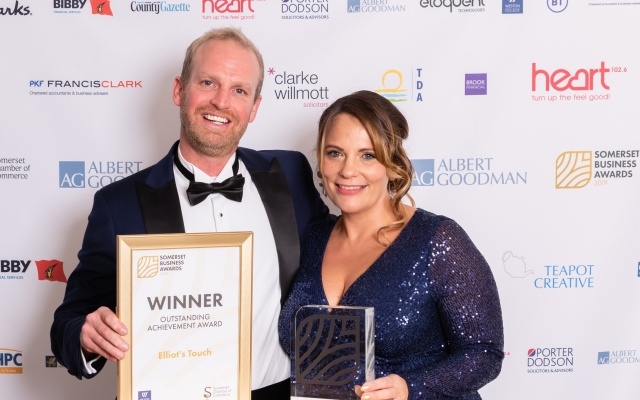 Hinkley Point B worker, Paul Stevens together with his wife Donna won a prestigious award at the recent Somerset Business Awards held at the Winter Gardens Pavilion, Weston Super Mare.

The couple, who live in Watchet, were presented with an outstanding achievement award in recognition of their dedicated charity work in memory of their young son Elliot, who died from Mitochondrial Disease and Cardiomyopathy at the age of just 13 months.

This was the first time the outstanding achievement category had been part of the awards which are organised annually by the Somerset Chamber of Commerce, with a purpose of recognising those who have gone above and beyond for the benefit of others.

After receiving the award in front of a standing ovation from the 400 guests present at the ceremony, Paul said: “We are both lost for words at winning this award as it has taken us by complete surprise. We would like to take this opportunity to thank everybody who has helped along the way.

“The whole purpose of setting up Elliot’s Touch was to make a difference to others and to create a legacy for him. We hope Elliot would have been very proud of the work we are doing, both now and into the future.”

With help from the Somerset Community Foundation, Paul and Donna set up a charity fund shortly after Elliot died to raise awareness of Cardiomyopathy and Mitochondrial Disease and to support organisations who are working on vital research and cures for the condition. Despite both working full time, Paul as an electrician for Engie at Hinkley Point B power station and Donna as a showroom manager for Jewson in Minehead, the courageous couple have run the charity from their home in Watchet. Ably assisted by a small and dedicated team of family, friends and other volunteers from the local community and their two respective workplaces, they have raised over £150,000 for Elliot’s Touch. The couple have been at the forefront of many of the fundraising opportunities. Paul has taken part in numerous sponsored events, whereas Donna takes on more of a coordinator role and is always organising fundraising events.

Peter Evans, Hinkley Point B’s Station Director, said: “I am so pleased to see Paul and Donna’s tremendous efforts being recognised, and they are deserved recipients of this special award.

“They have had an extremely traumatic experience and through adversity, their bravery, determination, desire and courage has continued to shine through. They have both achieved so much in Elliot’s memory and we are very pleased to be in a position where we are able to support them with their remarkable efforts.”

Dilated Cardiomyopathy affects the heart muscle, compromising the organ's ability to pump blood around the body, while Mitochondrial Disease is a rare genetic condition which can affect any organ but which leaves cells unable to produce enough energy to work. Elliot’s Mitochondrial Disease caused the onset of Cardiomyopathy. There is currently no known cure for either condition.

Elliot’s Touch is run in conjunction with the Somerset Community Foundation and more information is available on the website www.elliotstouch.org. 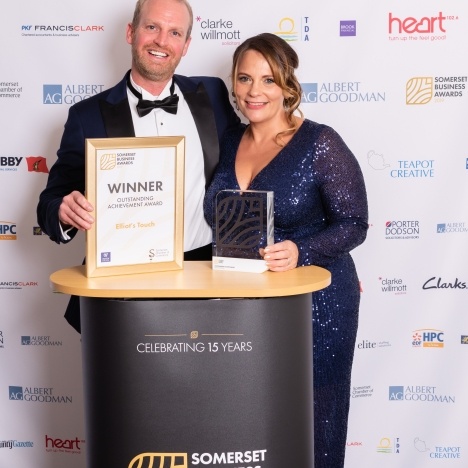 Hinkley Point B worker, Paul Stevens together with his wife Donna have won the Outstanding Achievement Award at the 2019 Somerset Business Awards
View | Download (2.16 MB)