Poppy Power on show at Dungeness B Visitor Centre 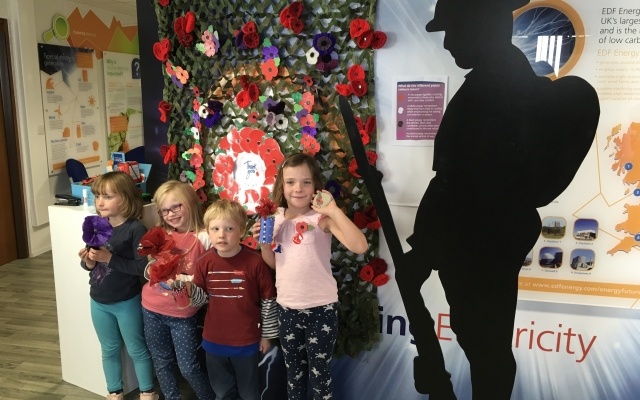 Local families helped celebrate a centenary of remembrance at the Dungeness B Visitor Centre during a series of creative Poppy Power educational events.

The Be Creative  STEM sessions were organised to coincide with the Let’s Cover the Marsh in Poppies initiative which brought together local scout groups, churches, businesses and the general public, with the aim of covering the Romney Marsh area in thousands of hand-made poppies.

The tributes to the fallen also involved support from the Royal British Legion, which organised  presentations at the Visitor Centre for local children, and for the visit of veterans from the Second World War, who re-counted their personal stories to visitors.

Alison Prentice, the visitor centre coordinator, said the colourful creative events, which took place in the exhibition area at the power station’s visitor centre, helped inform and enthuse the younger generation about remembrance.

“Local families enjoyed the sessions which had a bit of everything. They mixed art and craft with history, and information about STEM activities, designed to inspire the next generation of engineers.”

A special ‘soldier silhouette’, made by the Sea Cadet’s’ Mark Godden, formed a centrepiece of activities, along with a colourful wall of hand-made poppies.

People throughout Romney Marsh have been sewing, knitting and crocheting thousands of poppies for this year’s centenary of the end of Great War, and some 20,000 poppies adorned shop fronts, churches and places of business for the commemoration, which was part of a wider series of events including church services, beacon lighting and other educational events throughout the area.