Mark's fond farewell to Dungeness B 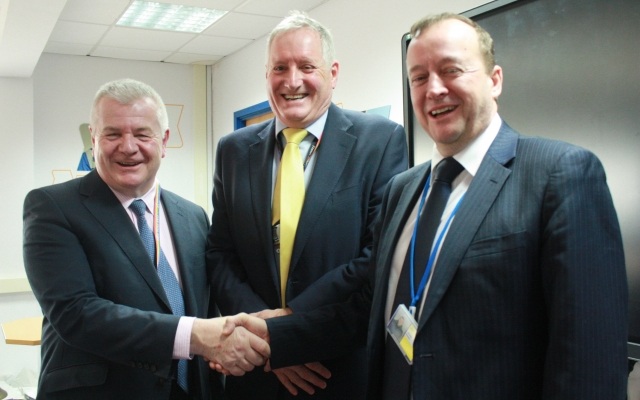 Former Station Director Mark Gorry was given a warm send-off by Dungeness B staff ahead of his retirement at the end of February.

Mark formed a close association with all things Dungeness during his time with the company, and paid a final visit to the station to catch-up with some old friends. He retires after 43 years in the nuclear industry and after stints as Station Director at five of EDF Energy’s nuclear power stations.

Since 2012 Mark has been Chief Nuclear Officer, Region 2, is a board member of EDF Energy Nuclear Generation Ltd, and is a member of the Licensee Board. He was accompanied on his visit to Dungeness by John Munro, who will take over from him as CNO at the end of February.

Ian Stewart, Dungeness B Station Director, and a close colleague of Mark’s for many years, paid tribute to his achievements and for his support of Dungeness over the years - and his enormous contribution to EDF Energy in a variety of operational, technical and management roles.

“Mark’s impact while he was here at Dungeness, and his support of the station through the years, has been outstanding,” said Ian.

“He was in charge at the station when it achieved a major step-change in performance, breaking output records and demonstrating improved operational focus, fuel route and improving many other things here beyond recognition.”

“But we should also thank Mark for his ongoing support of the station. He understood the history, and the complex design, and he helped tell the Dungeness story to newcomers, including new owners, new executive members, and the regulators. He has a great understanding of the station and the ability to tell the story of Dungeness B in a hugely supportive way. For this we are all grateful to him.”

At a special leaving presentation at the station’s training centre, Mark thanked Ian for his leaving presents – a framed painting of Dungeness B, and an old ship’s bell that Mark himself brought to the station, which he would ring to open morning meetings.

Mark said he was sad to be leaving his “family” of work colleagues within the industry, but looked forward to his retirement, especially sailing his boat with wife Aine, whom he met at Dungeness.

“Dungeness B is a very special part of my life. This station teaches you so much due to the complexity of how it developed. But I really believe this station can continue to achieve great things.”

“It can certainly produce 8 terrawatt hours per year -  and move forward as one of the very best performing stations. I wish you all luck in this journey, because I know you can do it.”