Harry Wardley-Buck, son of Systems Engineer Samantha, got a lot from the session he attended. “He had a terrific time and learned a lot,” said Samantha.  “All the activities were lots of fun and well managed by the friendly visitor centre team.”

The workshops proved hugely popular, with all five sessions fully booked in advance.

The youngsters, parents and guardians, were treated to a peek behind the scenes at the power station with a tour of the turbine hall and outside the reactor building.

Later in the day, the budding scientists continued to learn more about electricity generation through a range of activities, such as generating electricity using fruit and vegetables and building circuits to power bulbs, alarms and miniature fans.

Alongside the interactive workshops, the Dungeness B team have also been busy promoting STEM subjects at a range of events across the county by hosting information stands at the Kent County Show, Romney Country Fair, Hythe Venetian Fete and Lydd Club Day.

Alison Prentice, Visitor Centre Coordinator at the station said, “It’s really important to us that we get out into the community to promote STEM subjects to inspire the next generation so that we have the skills the power station needs in the future.

“It’s been great to meet so many enthusiastic young people at events like the International Scout Jamboree at Detling earlier this month and the Big Bang Science Fair in Crawley back in July.”

The visitor centre is already taking bookings for further sessions during the October half-term holidays. With only 20 places available for each day, anyone who is interested is advised to book early.

For more info details on how you or your children can get involved in the power station’s STEM programme, contact 01797 343728 or email dungenessbtours@edf-energy.com 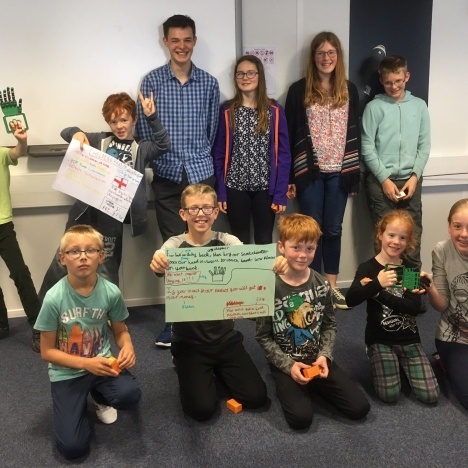 Harry, far left, is joined by other budding scientists to show off their robotic hands
View | Download (759.57 KB)