Ian's 50 golden years at Dungeness B 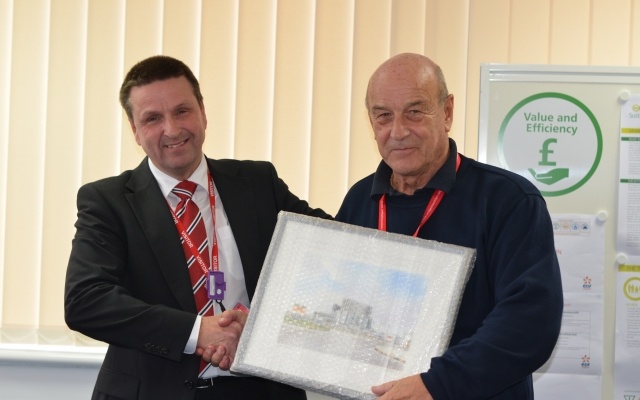 When Ian Harris first started work at Dungeness B, Mary Hopkins was at number one in the charts with “Those were the days”, and England’s football team was basking in the glory of being World Cup winners…

The scaffolder, from St. Mary’s Bay started work at the power station on the Kent coast as a wide-eyed teenager in November 1968, and recently celebrated 50 years on-site, saying he had no idea he would stay “on this incredible power station” for half a century.

Celebrating the golden work anniversary this week with a specially-baked cake, and the treasured “golden helmet” presented to him by Ian Stewart, Dungeness B station director, the popular safety officer was misty-eyed with pride as he recalled “an incredible journey.”

The 69-year-old is the longest-serving continuous worker at Dungeness B, and recalled his first day on the job, back in the swinging sixties.

“It was an incredible time for Britain, but also for this area. When I first arrived on site there was a hole in the ground, and some open steel works, that was it!”

Little did Ian realise that his journey would see him as an ever-present for the next 50 years, and give him a grandstand view of one of the UK’s greatest engineering feats.

“I’ve learned so much working at Dungeness over the years, and I’ve seen the station develop from a prototype which struggled in its earlier years, into the world-class station it is now, providing electricity for two million people. The attention to detail, staff training and safety standards here are second to none,” he said.

“All the station directors and my colleagues I have worked with have been incredible, and I am still learning, every day. I would recommend work in engineering and on power stations to any youngsters out there. It’s always been interesting and if you want to learn then this is an amazing place to further your career.”

“It’s been the making of me, and I am so passionate about the place.”

Ian’s longevity at Dungeness B is all the more remarkable as he has achieved his continuous 50-year stint from day one as a contractor, for a succession of engineering and scaffolding firms.

“I started work here for Balfour Beatty, and have also worked for companies such as APC, Vanges, Trad and latterly for Cape. I’ve seen the ownership of the station change a few times too, but I’ve always been a contractor. But here, when you clock on for work, we are all one team. Actually, we’re like a family.”

Along with his safety role, Ian is a shop steward on site, and was the first contractor to be part of the station’s health and safety advisory committee. As he works for scaffolding contractors Cape, he’s become known as the “Caped Crusader” on the station for his work in keeping safety the overriding priority.

Station director Ian Stewart presented him with a rare “golden helmet” at a recognition event on the station.

“Ian’s 50-year history at Dungeness B is an amazing story, and we wish him well as he continues in his role. He’s witnessed the station’s development first-hand, and is a great example of how working here can provide world-class training and a hugely interesting career.”