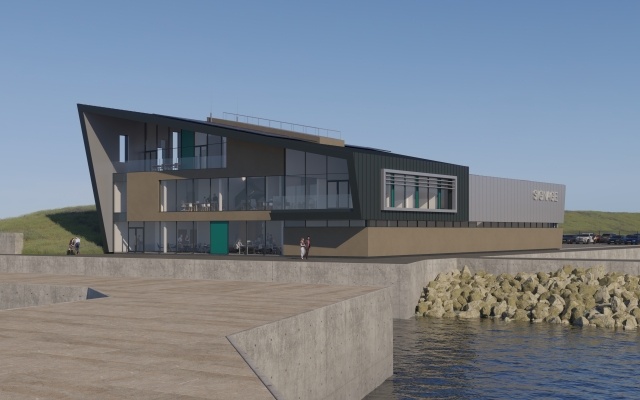 Artists impression of the Operations and Maintenance (O&M) building for the offshore wind farm in Eyemouth.
View | Download (3.33 MB)

A significant milestone for NnG, jointly owned by EDF Renewables and ESB, this development sees Eyemouth Harbour move a step closer to housing the project’s O&M base. The planning permission is for a new, three storey, 1,040 square metre main building and a two storey, 538 square metre storage warehouse.

The O&M building, designed by Corstorphine + Wright Architects, will house the office, warehousing and staff welfare facilities required to support the servicing of NnG once the wind farm is operational.

The investment in Eyemouth will bring an economic boost to the area providing up to 50 permanent jobs over the 25-year lifespan of the project. Additional benefits would see training, retraining and apprenticeship opportunities available to the residents of Eyemouth and the surrounding area.

NnG will supply enough low carbon electricity for around 375,000* homes and has a capacity of c. 450 megawatts (MW) of low carbon energy and will offset over 400,000 tonnes of Co2 emissions each year.

Matthias Haag, NnG Project Director, said: “Having worked so closely with the Eyemouth Harbour Trust on the details of this proposal I am very pleased that Scottish Borders Council has approved the plans for our O&M base at Eyemouth Harbour.

“We need an O&M base for the 25-year lifespan of NnG which brings with it fantastic socio-economic benefits for the town of Eyemouth and the local community. Today’s announcement is a significant next step towards NnG’s O&M facility being based in the town.”

"Today's decision by SBC is warmly welcomed by Eyemouth Harbour Trust. We have been working closely with the NnG project team to achieve this goal.  It’s another positive and significant step towards regeneration opportunities being realised in Eyemouth.”

Onshore construction continues for NnG at various locations along the cable route which runs underground from Thorntonloch beach and up into the Lammermuir Hills. Offshore work started in August with seabed preparations carried out in advance of the pile casings being installed.

Notes to editors
* Based upon the average domestic electricity consumption per home of 3,889 kWh per the Energy Consumption in the UK (published July 2017) and Renewable-UK offshore wind average load factor at 37.2%

Neart na Gaoithe means ‘strength of the wind’. NnG is a key UK offshore wind farm project and, with up to £1.8billion invested in its infrastructure, will have a major positive impact on the Scottish economy. NnG is located off the east coast of Scotland, 15.5 km off the Fife coast and covers an area of approximately 105 km2. EDF Renewables acquired NnG in 2018 and in 2019 sold a 50% stake to leading Irish Energy Company, ESB.

About EDF Renewables in the United Kingdom

EDF Renewables is one of the UK’s leading renewable energy companies which develops, builds and operates generation projects with a focus on onshore and offshore wind as well as battery storage technology. We also look after the operations and maintenance of our own wind farms. The company already operates more than 965MW of wind farms and battery storage (including 500 MW in Scotland with 460 MW under construction) and has more than 4GW consented and in development. The company employs more than 250 people.

ESB operates across the electricity market on the island of Ireland: from generation, through transmission and distribution to the supply of customers with an expanding presence across Great Britain. In 2017 ESB opened an office in Glasgow to spearhead further development of renewables, in particular onshore and offshore wind, across Scotland. ESB is the owner of the distribution and transmission networks in the Republic of Ireland (via ESB Networks) and Northern Ireland (via Northern Ireland Electricity Networks Ltd).  In 2017, the company had a 42% share of generation in the all-island market (via Generation and Wholesale Markets) and a 34% share of electricity supply in the all-island market (via Electric Ireland) with 1.4 million customer accounts. 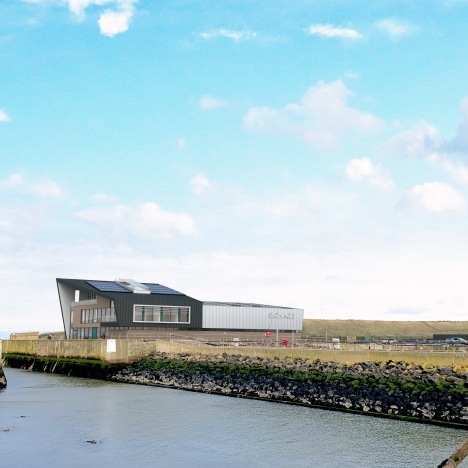 Artists impression of the Operations and Maintenance (O&M) building for the offshore wind farm in Eyemouth.
View | Download (5.42 MB)