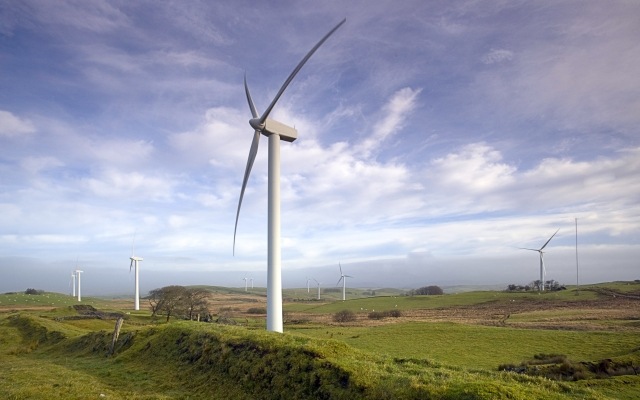 EDF Renewables (EDF R) is announcing plans to develop a wind farm called Garn Fach, south of Newtown, Powys, in partnership with 14 local farming families. The project is likely to consist of up to 22 turbines, each producing around 5 MW. That’s 110MW capable of generating enough low carbon electricity for the domestic needs of 66,000 households*.

Ahead of submitting a planning application for the wind farm at the end of 2020, EDF R has been carrying out ecological and other feasibility surveys.  Today (Thursday 9th January), EDF R is submitting an environmental scoping report to the Welsh Government and an application to Powys County Council to erect a met mast on site to gather accurate wind speed data.

EDF R is committed to an annual community benefit fund for Garn Fach of £5,000 per MW, which could be around £550,000 (depending on the final capacity of the project) per year available for local causes, or £16.5 million over the 30-year lifetime of the project.  The wind farm will also have the potential for local ownership, with opportunities for local people and organisations to invest and have a stake in the project.

This proposed investment from EDF Renewables comes at a time of growing concern about climate change which has prompted both the UK and Welsh Governments to embrace tougher targets for carbon emissions reduction by 2050. The Welsh Government has a target for Wales to be generating 70% of its electricity consumption from renewables by 2030.  To achieve this, more electricity will need to be generated from renewable and low carbon sources.

Onshore wind is now one of the cheapest ways of generating renewable or low carbon energy, and Garn Fach will be developed without the need for public subsidy.

Mark Vyvyan- Robinson, Director of Development and Investments at EDF R, said: “Garn Fach would make a positive contribution to our efforts to tackle climate change, as well as delivering benefits to the community.  We are pleased to be developing Garn Fach in partnership with 14 local farming families and hope that the wind farm will be seen as an asset in the community in our fight to tackle climate change.”

Public Information Days are being held by the EDF R project team in communities near to the proposed wind farm site for local people to gain a better understanding of the proposals and provide initial feedback.  Interactive 3D visual software modelling will be available at the exhibition to enable residents to see the effects of the proposed development from different angles and viewpoints.

The planning application for the wind farm will be assessed by the independent planning inspectorate, with a final decision being taken by the Welsh Government.

About the project: The project is currently being scoped for up to 22 turbines, each generating around 5MW of electricity.  The turbines will be up to 149.9 metres in height.  The site is part of the former Llaithddu wind farm proposal and is on land belonging to 14 different farmers and their wider families.  EDF R will make a formal grid application to National Grid in January.  Currently, the connection points and grid route are not known.  More details about the grid connection will be known during 2020 and will be shared publicly during the subsequent statutory pre-application consultation period in the summer.

Public Information Days:  The public information days (listed below) are a non-statutory part of the planning process.  A statutory pre-application consultation, which will include further public exhibitions, will take place later in the year.

About EDF Renewables:  EDF Renewables is part of one of the world’s largest electricity companies and our investment and innovation in the UK is bringing down costs for consumers and bringing significant benefits for communities. With our operating portfolio of 36 wind farms and battery storage unit (almost 1GW) we are providing some of the much needed new affordable, low carbon electricity to the UK. Work is well underway on the 450 MW Neart Na Gaoithe offshore wind farm project which is in the Firth of Forth and we’ve extended our Edinburgh office to accommodate around 60 new team members. We have now completed the 177 MW Dorenell wind farm near Dufftown in the Scottish Highlands which is the largest onshore wind farm in Europe for the EDF Renewables group.  We have more than 2 GW of renewables projects in planning and development and half of those are consented. We also have offices in Rainton Bridge near Durham and in London.

EDF Renewables in Wales:  In Wales, EDF R owns and operates two wind farms, and has an operational and maintenance base in Aberystwyth:

* Load factors based on the five-year rolling averages on unchanged configuration basis using Table 6.5 of 'Digest of UK Energy Statistics' - latest figures as per July 2019 release