A legacy fund donation from EDF Energy’s Hunterston B power station has been given to north Ayrshire’s longest running sea kayaking club, Castle Craigs Canoe Club (CCCC) based at Auchenharvie pool, Stevenston and Largs. The cash will be used to buy six new boats each with a paddle and a spray deck which will mostly benefit juniors, women and those with limited ability who take part in the sport.

The money, more than £4000, comes from the company’s Sporting Legacy Fund which was set up after the London 2012 Olympics to capture the spirit of the Games. EDF, of which EDF Energy is a UK subsidiary, was an official partner and electricity supplier to the London 2012 Olympic and Paralympic Games. The company supplied electricity to the Olympic Park which was backed by low-carbon nuclear and renewable sources.

Hunterston B power station director, Colin Weir, said, “We are delighted to be able to help the Castle Craigs Canoe Club in this way and I would hope the new equipment the money will help make a difference to the existing members of the club and perhaps encourage some new ones.”

Sinclair Malloy of the Castle Craigs Canoe Club said, “This money is very welcome and we would like to thank Hunterston B power station for this fantastic donation. It will allow us to buy dedicated purpose designed boats to use in the swimming pool, which is an important part of any training before venturing out in to the open sea. We will be getting small kayaks for juniors and women and extra large kayaks for those with limited ability. This will allow people to practice paddle strokes, rolling and rescue techniques.” 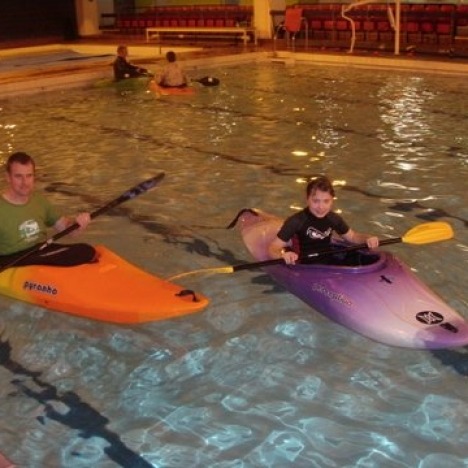