More than 200 school children from the Lothians and Borders have visited Torness power station as part of the Visitor Centre’s annual Christmas Cracker open learning week.

During the week pupils from Tweedmouth Middle School, George Heriot’s School and Berwick Middle School received a tour of the station, were able to get up close to one of the on-site police vehicles and took part in a virtual reality ‘build a nuclear reactor game’.

During their visit the pupils from Berwick Middle School had a lesson with a difference. They were fortunate enough to receive a curling lesson from Scotland’s women’s curling captain, Eve Muirhead, as part of EDF Energy’s education outreach work which helps children think about the links between sport and science.

As Team GB skip Eve Muirhead won bronze in the 2014 Sochi Winter Olympics and she has held World and European championship titles.

After hearing about her career in curling and the ways that science, technology, engineering and maths (STEM) are used in her sport the pupils took part in an indoor curling competition.

Torness Station Director, Robert Gunn, said: “We are delighted to be working with Eve Muirhead to help children make the connections between STEM and sport. We want to help people realise that careers in STEM are varied and that there are more opportunities than they probably realise available to them if they study STEM subjects at school.”

Visitor Centre coordinator Faith Scott said: “This is the fifth time our visitor centre has held the Christmas Cracker week. It is always a great event and meeting an Olympian proved to be a real highlight for the children. “ 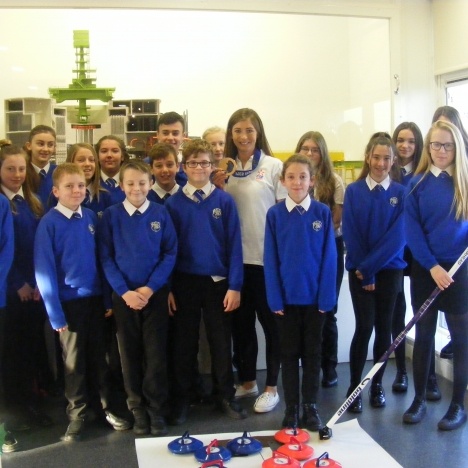