A pioneering wind farm development off the coast of Blyth has reached a notable milestone, with the first turbine foundation making its journey up the River Tyne on route to its final destination.

EDF Energy Renewables is currently building the Blyth Offshore Demonstrator Wind Farm after taking over responsibility for the scheme from Narec (now ORE Catapult) in October 2014.

The project will see five wind turbines with a total generating capacity of 41.5MW installed around 6.5km off the coast of Blyth. Once operational, they will generate enough low carbon electricity to power around 34,000 homes.*

Concrete gravity based foundations (GBFs) form part of the project and are being installed using a new “float and submerge” method – the first time this method has been used for offshore wind turbines. Designed and built by Royal BAM Group in the Neptune dry dock on the Tyne, the GBFs are being floated into position at sea and submerged onto the seabed to provide the support structures that act as the foundations for the installation of the wind turbines.

Each GBF is made up of more than 1,800m3 of concrete and weighs over 15,000 tonnes when fully installed on the seabed. The structures have a total height of around 60 metres from the base to the access platform.

The GBFs have been constructed at the Neptune dry dock over the past 12 months by BAM Nuttall and these structures will be floated down the river to the Port of Tyne, where extra ballast will be added ahead of their ‘tow-out’ to the offshore wind farm site.

Once the GBFs are put into position over the summer, specialist contractor VBMS will start laying the inter array cables that will connect the individual wind turbines.

Installation of five MHI Vestas V164 turbines will then commence once the cable is securely buried on the sea bed. The turbines will have a power rating of 8.3MW – the largest to be used on an offshore wind farm.  It is anticipated that the turbines will start generating power by the end of the year.

EDF ER Chief Executive Matthieu Hue said: “This is the first major offshore operation on this project and over the coming months people will be able to see the wind farm being built out at sea. This ground-breaking scheme will benefit the North East of England and help the UK to meet its future low carbon electricity needs.

“This is the first time that this float and submerge method has been used on a wind farm project. The GBFs are held in place by gravity and this unique design reduces the need to use expensive marine equipment for the installation on the sea bed.”

Divisional Director at BAM Nuttall Scotland and the North of England, Gareth Farrier said, “Bam Nuttall and the wider BAM group are delighted to be supporting EDF Energy Renewables on this demonstrator project, through both the opportunity to deliver innovation and engineering excellence in overcoming the many design and construction challenges, and by continuing our long tradition of civil engineering that has many positive impacts upon the lives of the people in the North-East.”

• The Blyth Offshore Demonstrator project will produce enough low carbon electricity to power approximately 34,000 UK households
• It will save around 57,600 tonnes of CO2 emissions each year
• It will be the first offshore wind project to connect using 66kv rated cables
• It will be the first time that a “float and submerge” gravity based foundation is used for offshore wind turbines
• Each gravity based foundation will weigh more than 15,000 tonnes when fully installed
• 8.0MW wind turbines with a power mode uprating them to 8.3MW will be installed

EDF Energy Renewables is one of the UK’s leading renewable energy companies which develops, builds and operates generation projects with a focus on onshore and offshore wind as well as battery storage technology. The company already operates more than 696MW of wind farms and has more than 1GW in development.

The company employs more than 150 people. It is a 50:50 Joint Venture between EDF Energy and EDF Energies Nouvelles. 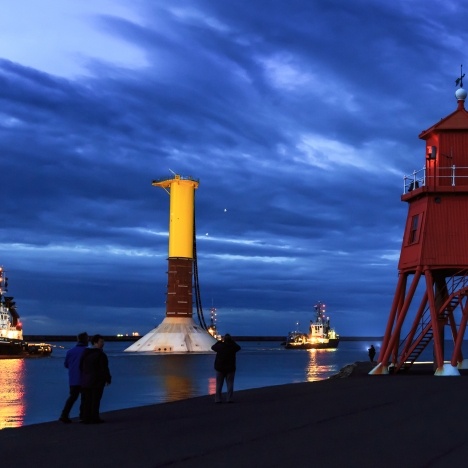 A finished gravity based foundation being towed out of River Tyne to be put into position
View | Download (4.85 MB)