It has been a busy year for fundraisers at EDF Energy’s Torness power station with more than £12,000 raised for Marie Curie Cancer Care through various events. The charity has been EDF Energy’s partner since May 2013 and this will continue until 2016.

The station as held several fundraising events and many employees have completed their own challenges to raise cash. There have been tea parties, dress down days, sponsored walks, leg waxing, cake sales, tombolas, raffles and much more. Earlier this year, Archie Martin, got on his bike to raise more than £1,600 by taking part in the Marie Curie Etape Mercia race. He completed the 69 mile route through the West Cheshire countryside. The Torness Rat Race team raised nearly £800 taking part in a 10k run with more than 20 obstacles in Edinburgh. In June Torness staff enjoyed an Olympian party at the Edinburgh Corn Exchange to celebrate 25 years in operation and nearly £4,000 was raised for Marie Curie at the event.,

The power station has also held a very successful Christmas Fair and raffle, raising a total of almost £1,400 for the charity with one of the highlights being a Christmas jumper competition! Station director, Paul Winkle, said, “The employees here at Torness have certainly risen to the challenge of raising as much money as they possibly can for a cause that is close to many people’s hearts. I would like to thank them all for their contributions no matter how big or small and I am confident the fundraising will continue over the next couple of years.”

Paul Thompson, Marie Curie's Head of Regional Fundraising for Scotland, said:“We’re absolutely overwhelmed by the support we’ve received from the employees at Torness power station. They have taken the challenge head on and raised a fantastic amount of money. The enthusiasm, creativity and passion they have demonstrated is inspiring, and we’re so thankful for all of their hard work.

“All the money they have raised will go towards helping Marie Curie provide more free care to those with terminal illnesses, allowing them to die in a place of their choosing, surrounded by their loved ones.”

EDF Energy match funds the first £100,000 raised by employees across the UK in each year of the partnership. 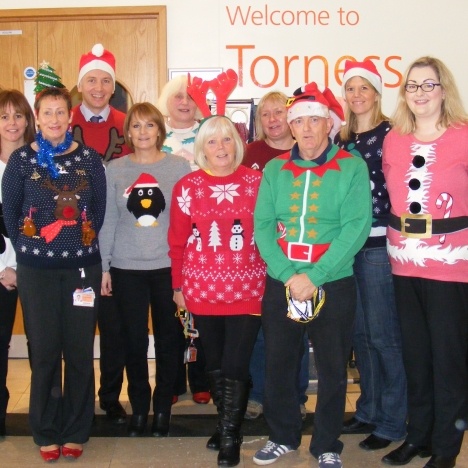