There has been a long-held understanding that the graphite in the reactor cores of EDF’s seven Advanced Gas-Cooled Reactors would change over time. There are two main changes we expect to see as the graphite ages; these are cracking and weight loss. We cannot replace or repair it so we have been working over many years to better understand and prepare for this and to support their continued operation.

The challenge of modelling is to bring complementary knowledge and insightful predictions that cannot be reckoned from normal inspection outage. Over the past 10 years, a consortium led by EDF Generation, EDF R&D UK Centre, the University of Glasgow and Jacobs has intended to develop the numerical tools needed to study the crack developing in the reactors.

The process of modelling the crack propagation has two phases of simulation: the ageing of the graphite bricks in its core environment, and finally the crack propagation. This requires a complex simulation environment which embeds a coupling of salome_meca/code_aster (EDF in-house software) and MoFEM (Mesh-oriented Finite Element Method software developed at the University of Glasgow).

The modelling and simulation environment required to perform the studies requires constant interaction (see Figure 1) between the ageing and the cracking phase, which until recently required a lot of time, attention and skills. Hence the development of the graphite workbench.

The graphite workbench: a technology enabler at the service of future industrial studies 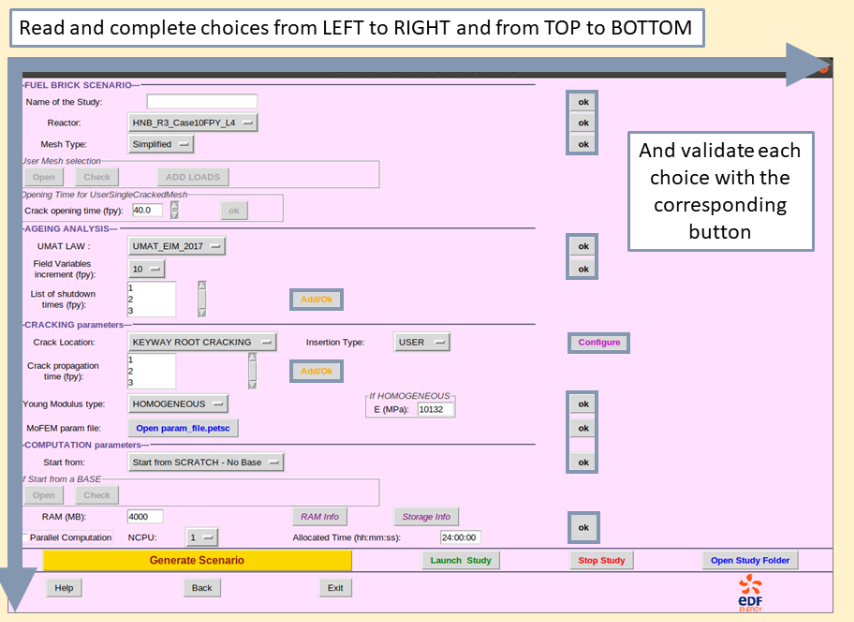 The graphite workbench (Figure 2) is a capitalization tool which plays an important role in facilitating the studies. It is a unified tool that embeds the entire chaining algorithm between the software. Originally developed for the lead reactor stations at Hinkley and Hunterston and for a specific type of crack (keyway root cracking), the graphite workbench has advanced in a modular way to rapidly increase the library of 6 power stations and various crack configurations. It can also integrate new developments in code_aster and MoFEM to constantly improve the performance, robustness and accuracy.

With the graphite workbench, EDF R&D UK Centre has transformed its way of working, accelerating knowledge transfer within the team, reducing errors in the process, controlling the software version and connections between software. It is a pipeline for the integration of new features, it sets the boundaries of the current capabilities and it facilitates transfer to end-user.

By using the graphite workbench in early 2020, Jacobs (the end-user) has been able to accelerate the studies for mature reactors and has given useful feedback to strengthen the tool. Knowledge transfer and learning curves have also been fast-tracked.

In April 2020, the latest advances at the University of Glasgow, EDF UK Centre and Jacobs were presented to EDF Generation, in presence of programme managers and extended to safety case officers of most power stations. Those participants acknowledged the good progress that has been made and the maturity of the simulation environment development and modelling capabilities. A follow-up meeting was held the following week at EDF Generation to prioritise the work and a scoping document for the forthcoming work is being written at Jacobs, to address those challenges. The EDF R&D UK Centre will support the implementation of those cases in the graphite bench.