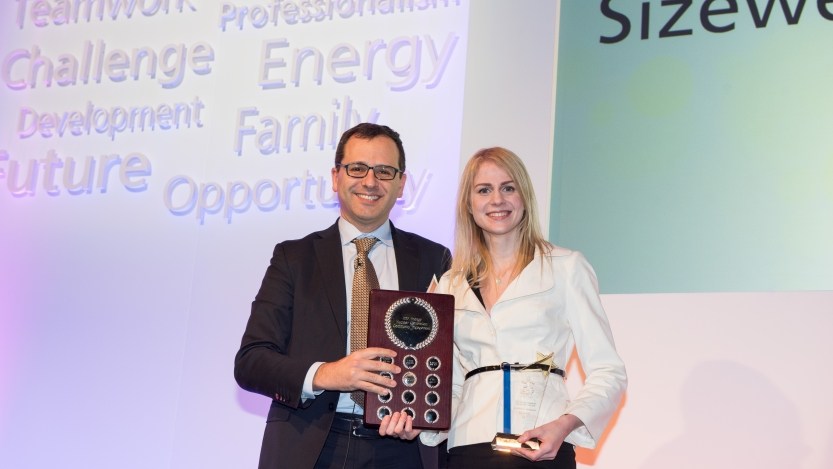 EDF Energy is welcoming more and more women into its apprentice scheme, the company’s new CEO Simone Rossi told an audience of graduating apprentices and their families.

Simone was attending the EDF Energy apprentice graduation ceremony for the first time and before the formal awards met with the former apprentices and their families.

Rachel received the company Community Engagement Award for the active role she takes to encourage young people to study STEM subjects.  Whilst Ashley was named the Sizewell B apprentice of the year.

The company’s push for more women engineers to join its apprentice and graduate schemes is paying off thanks to such innovative campaigns as ‘Pretty Curious’, which recently partnered with Disney’s new Star Wars film.

Simone Rossi, EDF Energy CEO, said:  “It is very pleasing to me that we have attracted an increasing number of young women into the Generation apprenticeship scheme.  This year around 35 per cent of our intake is female – far above the average for STEM apprenticeships.

“This is something that is very important to us, not just because we are firm believers in the power of having a diverse and inclusive workforce, but also because we know that there are many, many highly capable young women who for whatever reason are being deterred from considering a career in engineering and science.

“We are trying to play our part in helping to make these careers more attractive and I am very pleased that we have just relaunched our ‘Pretty Curious’ campaign in an exciting partnership with the new ‘Star Wars’ film that features a female engineer as its lead character.

“This partnership will help us to reach out still further to talented people – boys and girls – who maybe had not previously seen themselves working in an industry like ours.”

Each of EDF Energy’s 59 graduating apprentices, from engineering, supply chain, smart metering and business, received certificates from Simone who also awarded The Community Engagement Award to Rachel Wills, of  Sizewell B, for her STEM ambassador role.

Janet Hogben, EDF Energy’s chief people officer, also addressed the event. She said: “Since we started our maintenance apprenticeship scheme in 2008 close to 600 people have passed through the scheme, the overwhelming majority are still with us – in fact less than five per cent of apprentices have moved on.

“We will never take that loyalty for granted, we will always work as hard as we can to help you be successful.”

In November, EDF Energy’s sites launched the search for their 2018 apprentices. The training scheme starts with two years at the world-renowned training base at HMS Sultan near Portsmouth. The apprentices spend the final two years at their home bases where they get on-the-job training.

The scheme is open to anyone from year 11 upwards, the minimum entry is five GCSEs at Grade C or above (or Grade 4 and above in the new GCSE grading structure), National 5 or equivalent, including Maths, English and 2 of either Science, Technical or Engineering subjects