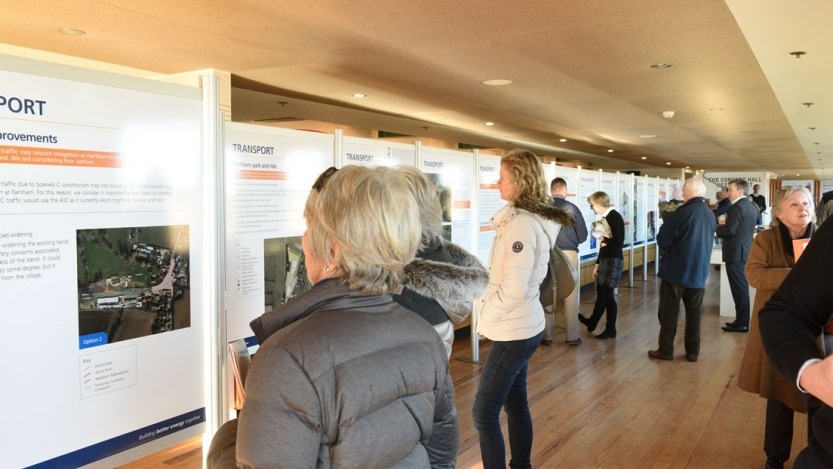 Ten weeks of public consultation for Sizewell C, the proposed new power station in Suffolk, begins today (18 July). The consultation focuses on some updated details since Stage 3, which include:

The latest proposals include a new integrated transport strategy option which uses road, rail and a beach landing facility to move freight during the construction of Sizewell C. This follows feedback from Stage 3 and learning from Hinkley Point C which is being built in Somerset.

Sizewell C is proposing some changes to the new Sizewell link road from the A12 to the B1122. The route was proposed at Stage 3 and bypasses some of the most impacted communities, such as Theberton and Middleton Moor. The route joins the A12 north of Kelsale-cum-Carlton, south of Yoxford. We are now asking local people if they would prefer this to be a temporary road, just used during the construction of the power station.

The integrated transport strategy would see three trains a day arrive directly into the Sizewell site off the Saxmundham to Leiston branch line. This would require refurbishment of the branch line, along with the construction of a new direct rail line into the site which passes to the north of Leiston. This temporary railway line into the site would also only be used during construction, and the land would be reinstated when the power station is complete. Furthermore, this option would not require the scale of changes to the East Suffolk line which was proposed in the rail-led option, meaning pedestrian crossings could remain open and diversions would no longer be necessary.

“However, we know that people feel strongly about how we move freight and workers during the construction of Sizewell C. That is why we are proposing an integrated transport option that takes elements of both the road and rail strategies in order to reduce the amount of traffic on local roads further, whilst we continue to deliver the largest equipment to the site via sea using the beach landing facility.”

More land is proposed for wildlife, in particular the protected Marsh Harrier population that is seen at RSPB Minsmere. The latest proposals suggest three additional sites to support the marsh harrier breeding population. Two sites are also suggested to compensate for fen meadow found on the Site of Special Scientific Interest (SSSI) in addition to the development of the Aldhurst Farm Wetland Habitat Creation scheme which is already in place.

Further work by the Sizewell C team alongside colleagues at Hinkley Point C has helped to identify the jobs which would be created by Sizewell C.  The team are working with local colleges and education providers to address the need for jobs in the following areas during construction:

Civil construction - requires over 2,300 roles, including more than 800 steel fixers, 450 lifting operations technicians, over 450 qualified supervisors, and more than 225 site technicians and graduate engineers and 300 excavator operators. All of these roles require training implementation at or before the start of construction in order to offer significant and sustainable opportunities for local people.

Mechanical, electrical, and air conditioning - has a need for more than 3,300 roles, including 490 welders, 800 electricians, 600 engineers, and 300 cable installation workers.

Earthworks/enabling - includes a need for more than 1,900 people, including 650 construction general operatives. These roles will build on construction skills already prevalent in the local area and act as a route into the civil construction phase.

During construction and operation, about 1,700 roles will also be available including more than 700 high level security officers and drivers, and over 600 operations support, administrator, and document controller roles, there are excellent opportunities for returners to work and adult ‘re-skillers’.

Following Stage 4 consultation we will consider all responses and any additional comments on the Stage 3 proposals. We will use them - along with further environmental and modelling assessments, continued engagement with statutory authorities and others, and lessons from Hinkley Point C - to prepare and submit our application to the Planning Inspectorate (PINS) for development consent for Sizewell C.