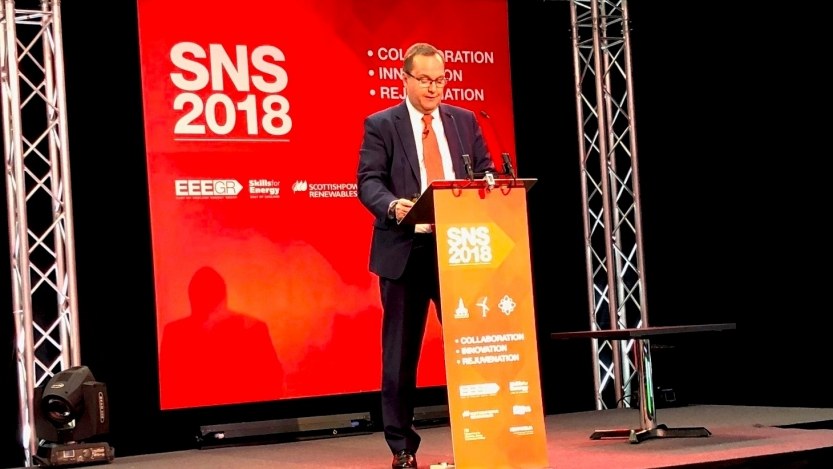 The EEEGR conference heard how the Sizewell C project is in a unique position to offer the UK competitive electricity being the only ‘second of a kind’ nuclear project in the UK.

Following the construction progress at Hinkley Point C in Somerset, EDF Energy and long term partners CGN, are moving forward with plans to build Sizewell C in Suffolk and Bradwell B in Essex, giving the region significant long term, large scale business, skills and job opportunities. Sizewell C will use the same EPR technology as Hinkley Point C which is already under construction.

Speaking at the conference at the Norfolk Showground, Jim Crawford, Sizewell C project development director and deputy CEO for Bradwell B, said:

“Sizewell C will be a near replica of Hinkley Point C whichmeans it can be built significantly cheaper.  The supply chain is mature, the connection to the National Grid is in place and the design of the power station technology already approved.

“Hinkley Point C is delivering major benefits to the South West, with contracts worth £465m already awarded to businesses in the region and over 3,000 people working today on the site.  The same benefits for the economy and people in the East of England could be realised here through Sizewell C and Bradwell B.”

EDF Energy has completed two out of three stages of public consultation for the Sizewell C project which would be capable of delivering power to 6 million homes and offer 5,600 job opportunities at peak construction.  In addition to the joint projects in the UK, EDF and CGN are working on a new nuclear power station in Taishan which will be operational this year using the EPR technology which is being used at Hinkley Point C and Sizewell C.

Industry regulators are going through step two of the four step regulatory process of the Generic Design Assessment (GDA) for the UK HPR1000 nuclear technology which is intended to be used at Bradwell. The GDA process will take a number of years to complete but this marks a significant step in the robust and thorough process to seek permission to build a nuclear power station at Bradwell in Essex.  CGN is in the final stages of building a nuclear power station at Fangchenggang (FCG) in China using HPR1000 technology.  This is the reference plant for the UKHPR1000, which is the proposed technology for the Bradwell B project (BRB).

Mums and Dads take their children to work with them at Sizewell BTaishan 1, world’s first EPR connected to the grid