Over the last two months EDF Energy, joint with Breast Cancer Now have been showing support for our LGBT communities by taking part in four regional Pride events.

Every Summer Pride events take place the length and breadth of the country to celebrate diversity and to continue the journey for full equality for the LGBT community. These events are vibrant, family-orientated and wonderfully emotional celebrations across the diverse spectrum of the LGBT community.

Jane Francis, LGBT Supporters Network Chairperson said “Being a part of the Pride parades around the country is about us, as a key employer in the regions, declaring very publicly our inclusion priorities. It's about EDF Energy being a Force for Good, being a role model employer, coming out and visibly supporting our LGBTQI employees, contractors, families, friends and customers. It's a really powerful message that reaches way beyond the day job.

I am always moved by the parades, as it is such an uplifting experience seeing so many people turn out to support this wonderful community and I'm so proud to be a part of it. I'd love for everyone to come along to an event next year. Whether you are straight or identify as LGBTQI, this is a great way to show your support for your friends and colleagues, some of whom may still be trying to come out at work or home. Be yourself and be proud.” 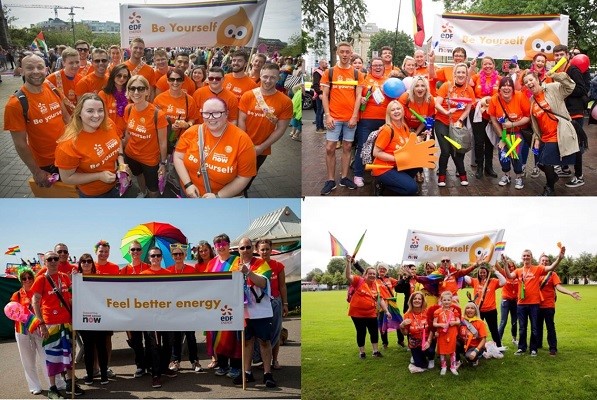 Around 80 EDF Energy employees, along with their friends, families and Breast Cancer Now supporters took to the streets of Bristol, Newcastle, Brighton and Glasgow, walking the 2 mile route as part of the parade.

We kick started with Bristol Pride, led by LGBT Supporters Network Deputy Chair person Rhys Kearney "this year’s Bristol Pride was as busy affair as ever with smiles, dancing and sticker giving! - in fact there were more people in the parade than there were watching it! With EDF Energy’s presence in Bristol as part of the HPC project, this was a great day for people of Bristol to see that EDF Energy is committed to diversity and inclusion within the local community."

At every location it was an incredible sight to see a cluster of orange t-shirts, endorsed by Zingy walking and dancing the entire way.

“Brighton Pride was fantastic this year, whilst we were a small group we were a very enthusiastic one!

It was great to see such passion and engagement from those that took part in the parade championing EDF Energy’s inclusion agenda. Thank you for a fabulous day!” – Sarah Lockley, Diversity & Inclusion Specialist, Hove.

“I had such a good time at Pride, it was my first Pride and I will be back every year now! I absolutely loved the unity and happiness that helped carry the whole parade. I was proud to be there with you guys.” – Charlotte Carlin, Customer Services Advisor, Doxford.

Everyone who took part has helped to spread our message that EDF Energy is an LGBT inclusive company, both for our employees and our customers.

Robert Gilhooly, Financial Shared Services Director took part in Glasgow Pride and had this to say – “We had another great day, again, in spite of the weather and even made the main picture on the BBC News article!

This was the second year we have supported Pride in Glasgow and my second year of attending. I guess I was paying more attention to the people watching the parade and was struck by the number of young people there on their own.

Hopefully if they were feeling lonely rather than just being in town on their own, the parade helped them feel a part of something.”